When we woke in Lübeck the weather was looking dodgy for our planned route. Being creatures of habit and scared of change we had planned to use Groningen and Kortrijk and get across to Rochester for the nightstop…but there was a forecast line of thunderstorms across the Netherlands from Amsterdam northwards. This meant that Groningen was out.

The storms were not forecast for the south of the Netherlands, so we planned to head south into Germany before turning west. We planned to refuel at Münster/Osnabruck then head for Kortrijk. With that in mind we jumped into our taxi and headed for the airport.

Once again the plan fell apart. Munster had the builders in at the fuel station and had put out a NOTAM (Notice to Airmen) to that effect. We replanned for Paderborn/Lippstadt but this meant we then needed another fuel stop as we didn’t have enough to get to Kortrijk. I’ve always wanted to go to the Dutch airfield of Midden Zeeland so that’s where we decided to go. With the law of unintended consequences having a field day we then didn’t have enough time to get to Rochester, so Kortrijk became a nightstop. Remember, flexibility is the key!

Airborne from Lübeck heading southwest we crossed the Elbe… 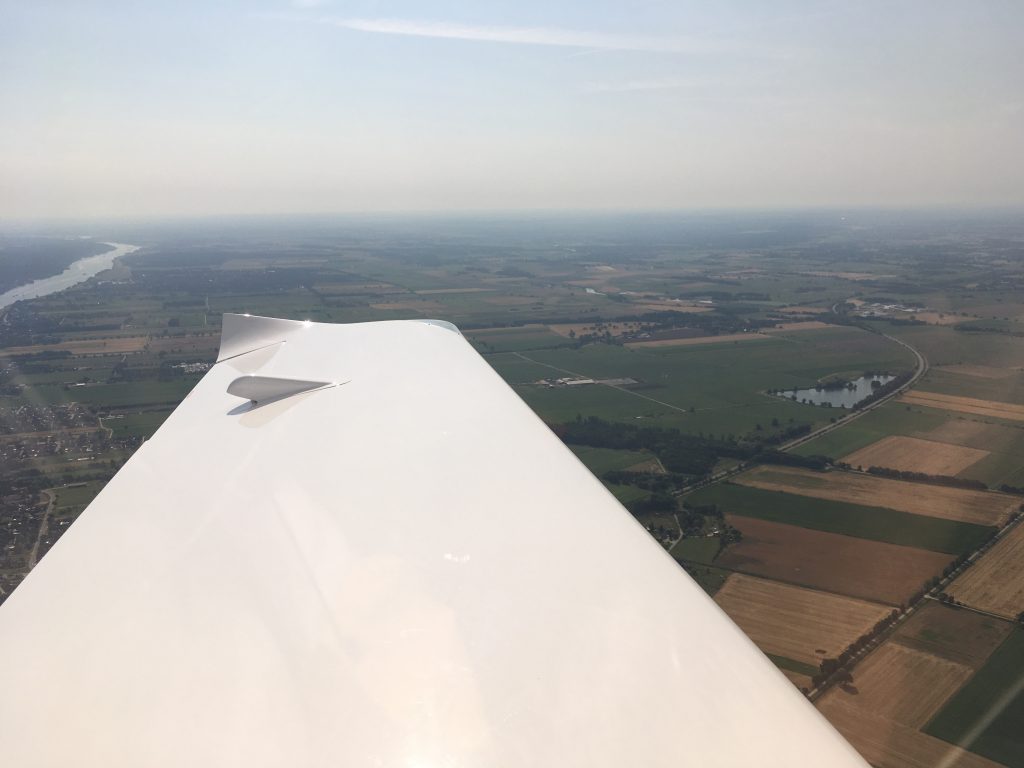 Then it turned and followed us for a bit… 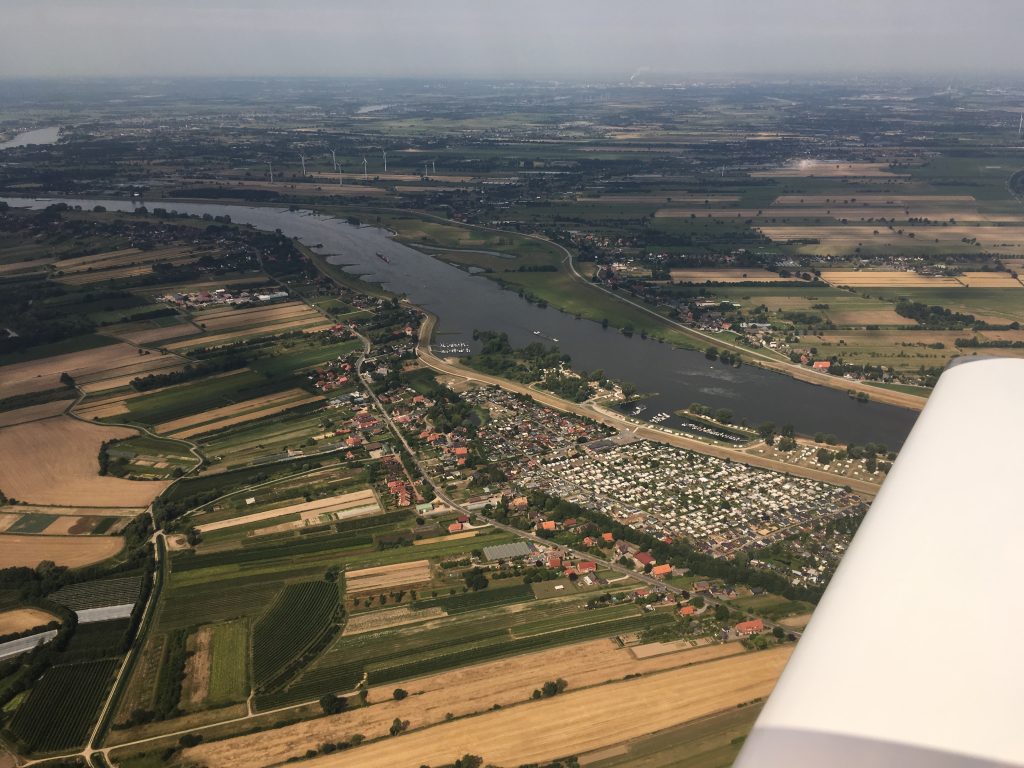 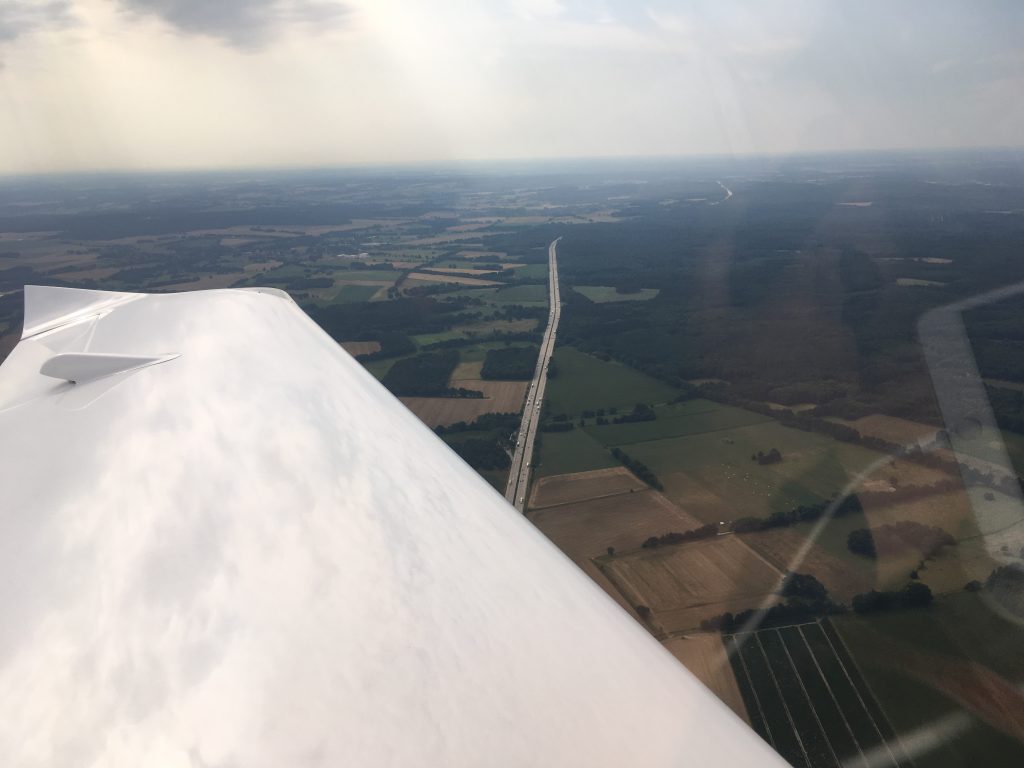 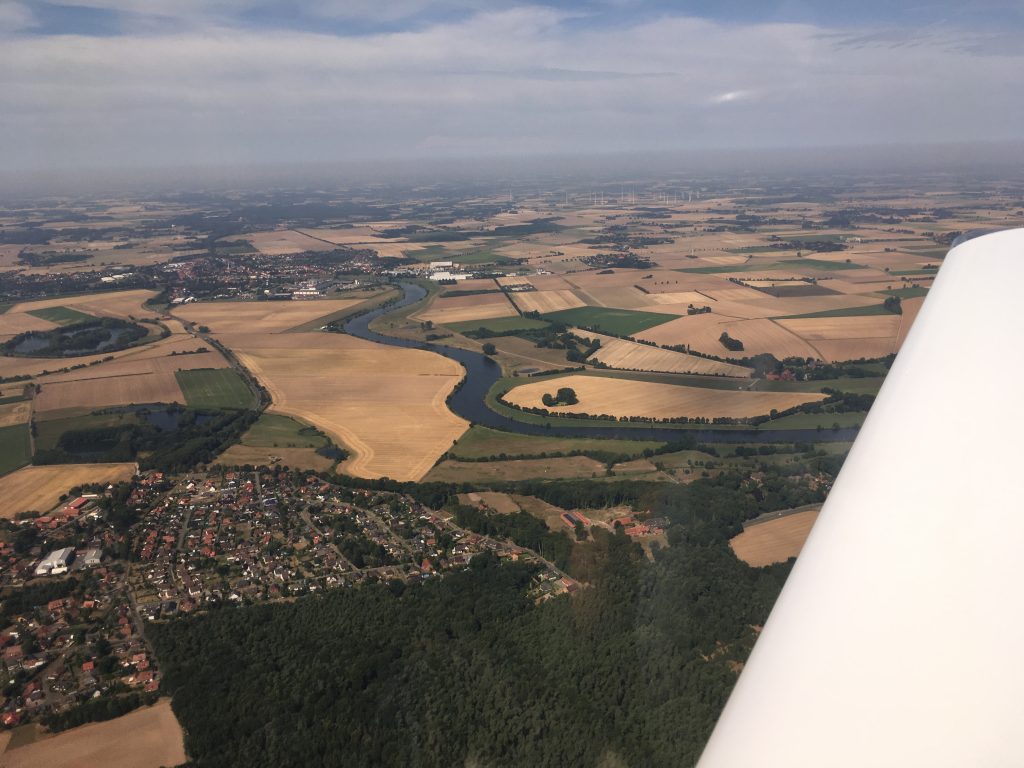 Passing Bielefeld, heading south towards Paderborn. That light coloured strip in the distance is the now-disused RAF Germany station at Gütersloh, former home of the Harriers, Pumas and Chinooks: 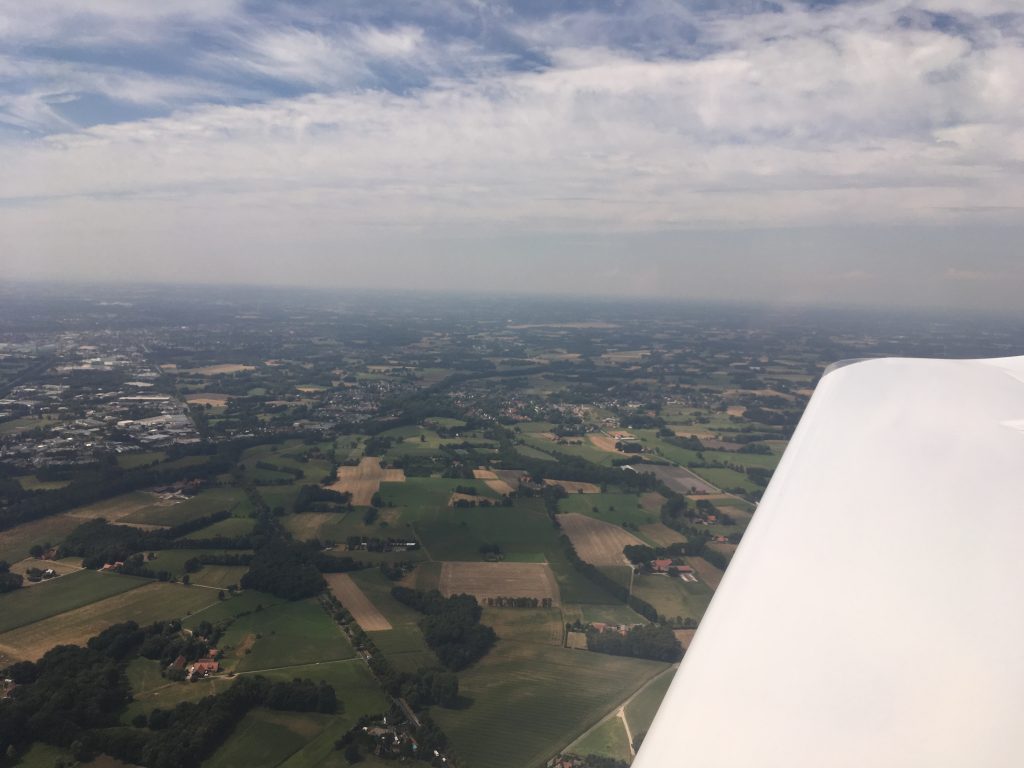 We were soon parked up at Paderborn. No self service pump here – a towed fuel trailer comes to the aircraft. We had a bit of a faff paying the bill as the card machine refused our card, and again, and another card, and another. After a good old “power supply reset” – also known as the “Microsoft on/off/on” – it took the first card straight away.

I had to use the same card for an emergency top up of Skydemon flight plan credits as they only last for a year and today was their expiry date. Typical…just when we were in a hurry. 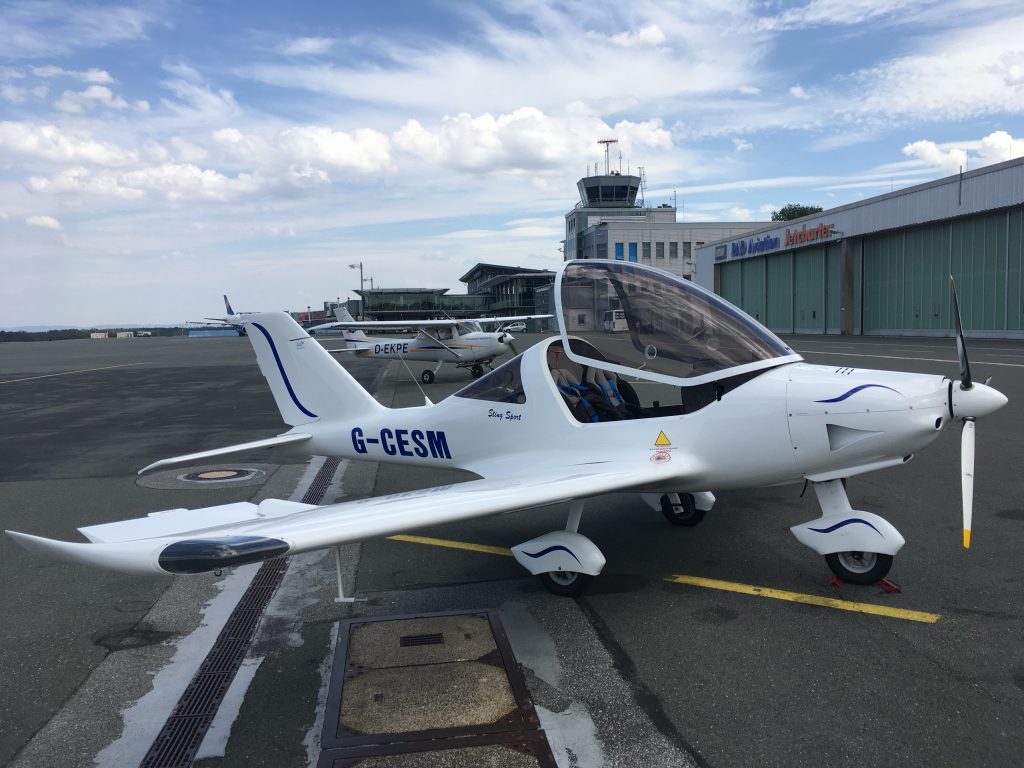 After a rehydration stop in the terminal building,we went back to the aircraft. Zoom in on the nose wheel of the Piper Archer next to us and you’ll see they couldn’t park with the nose wheel on the yellow line either! 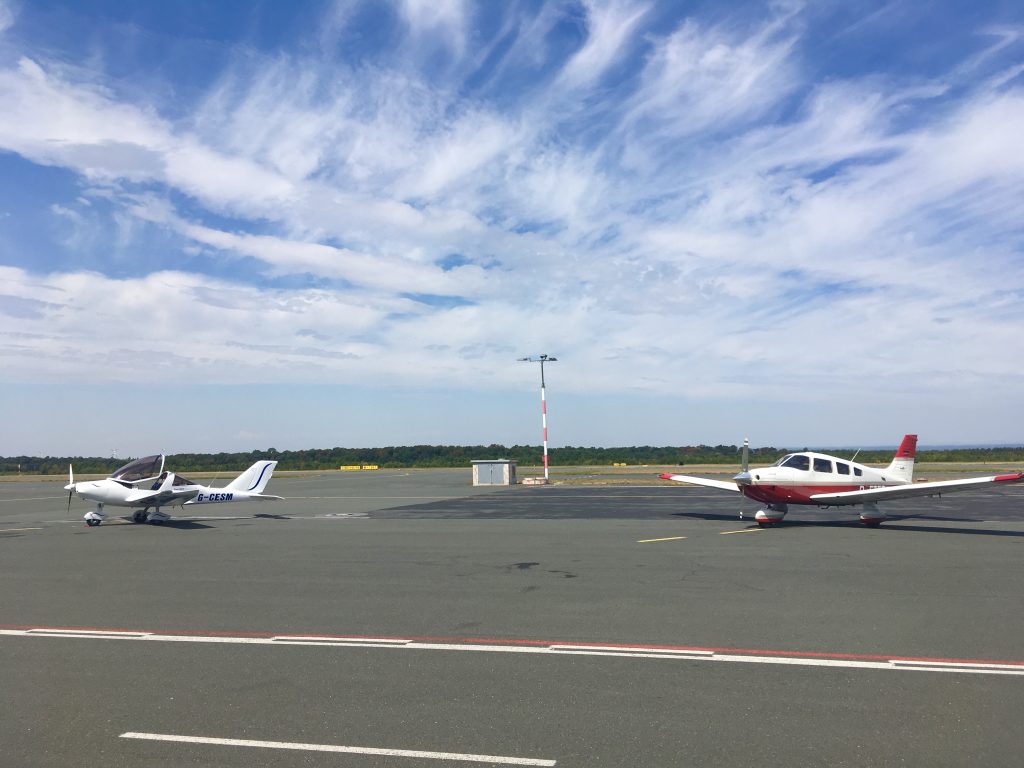 Taxiing out at Paderborn, there was a charter flight pushing back: 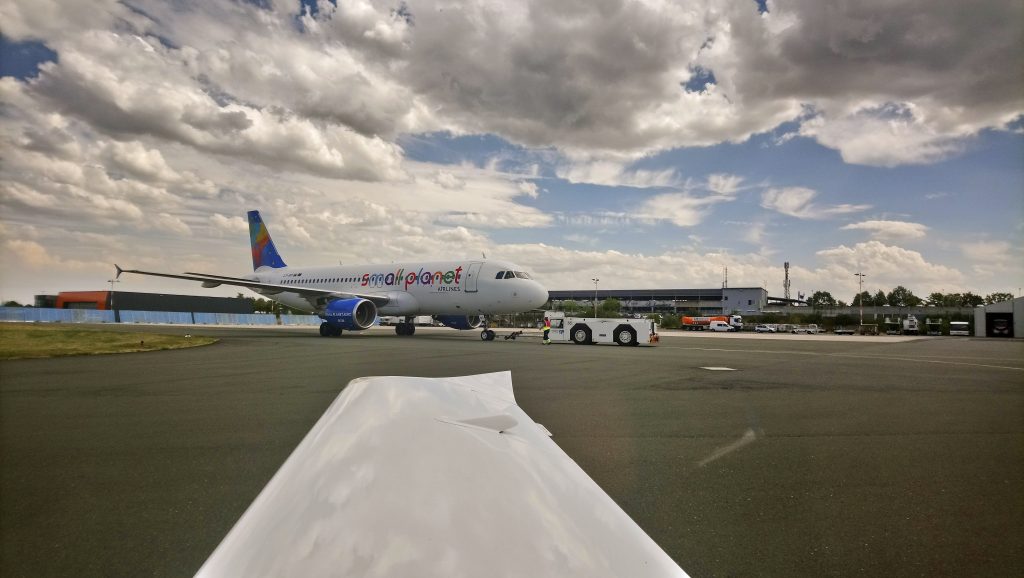 Did you ever have the feeling you are being followed? 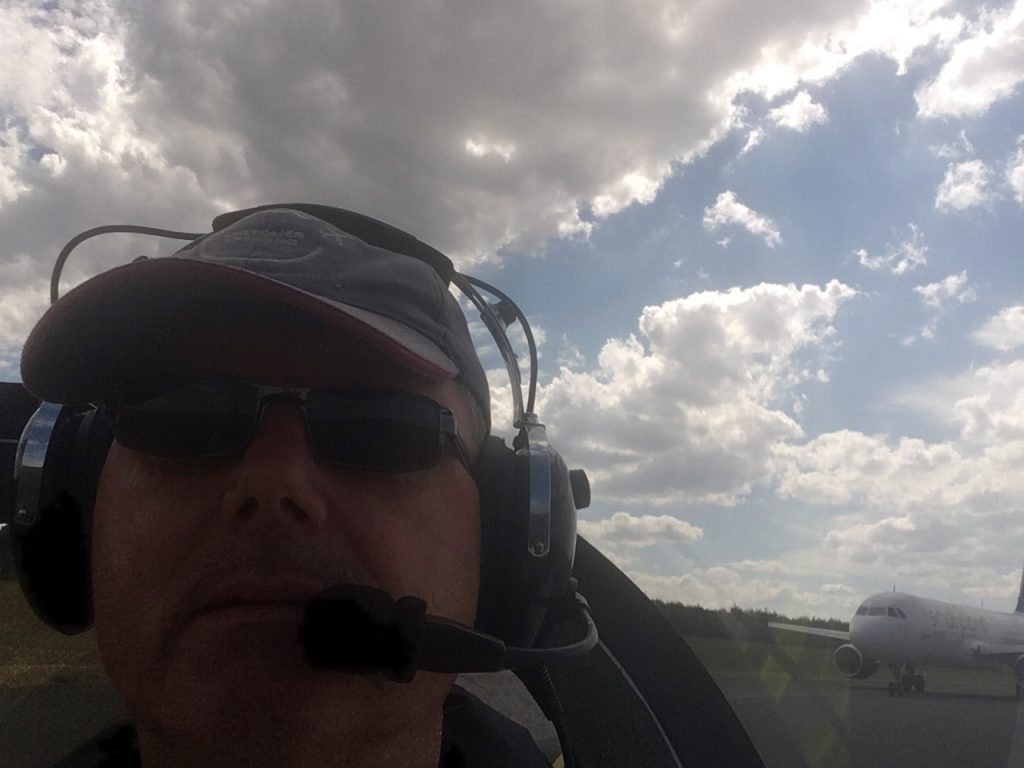 Airborne again, west from Paderborn/Lippstadt towards the Dutch border at Nijmegen… 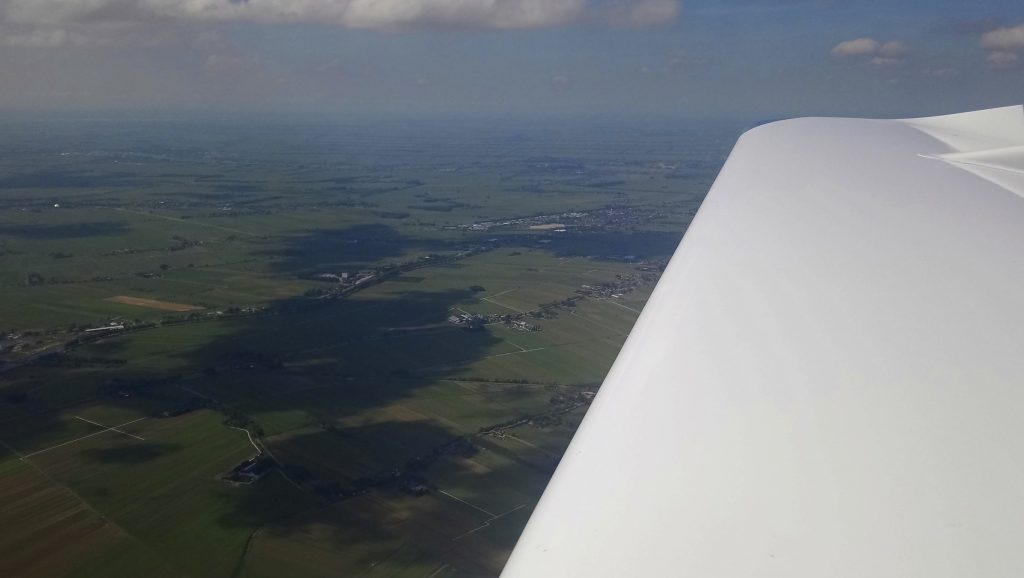 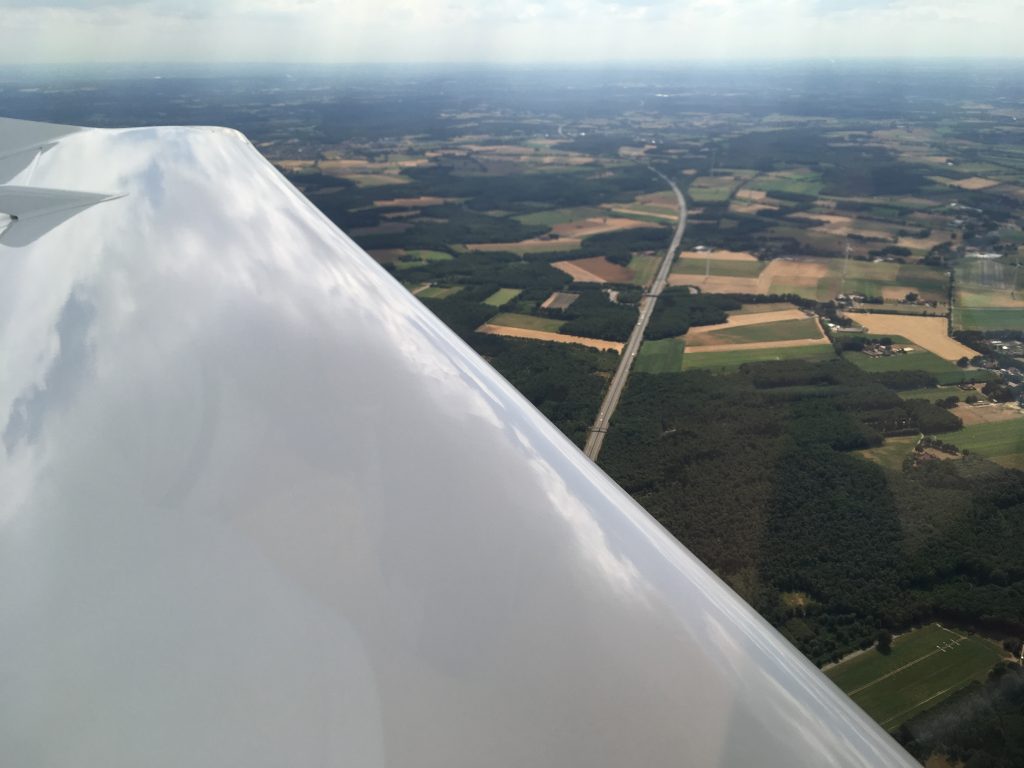 Back over the flatlands…crossing the Rhine: 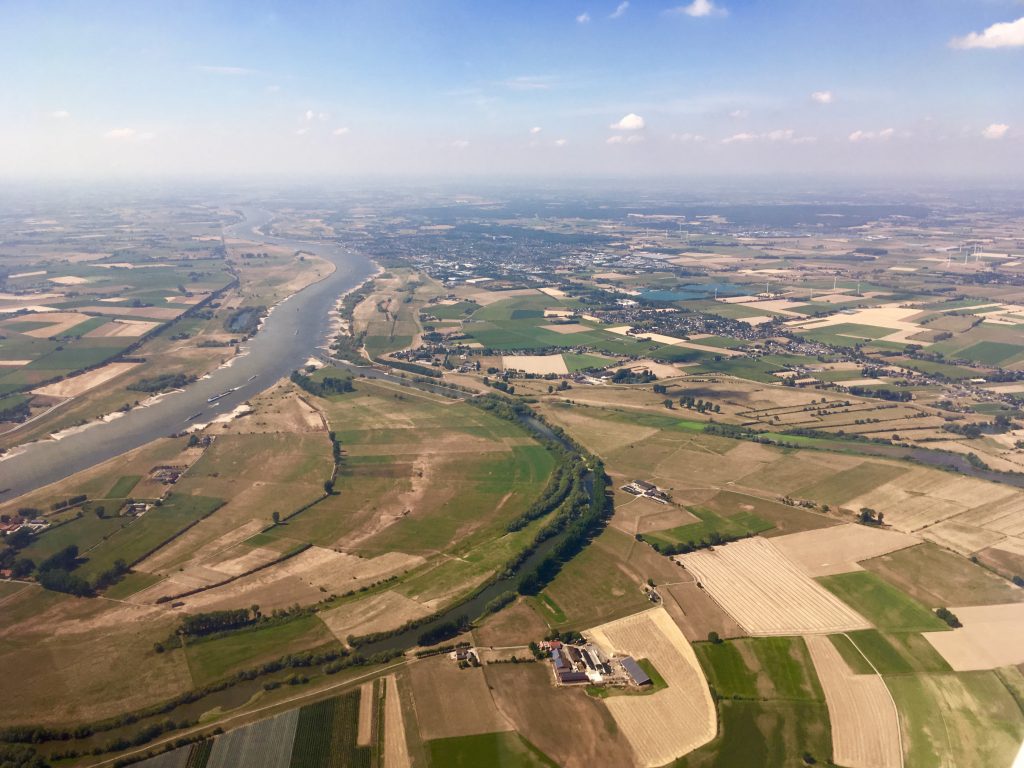 At the border. The Rhine at the wingtip flows towards the left and then splits. The Waal (left) goes to Nijmegen and the Nederrijn (right) goes to Arnhem… 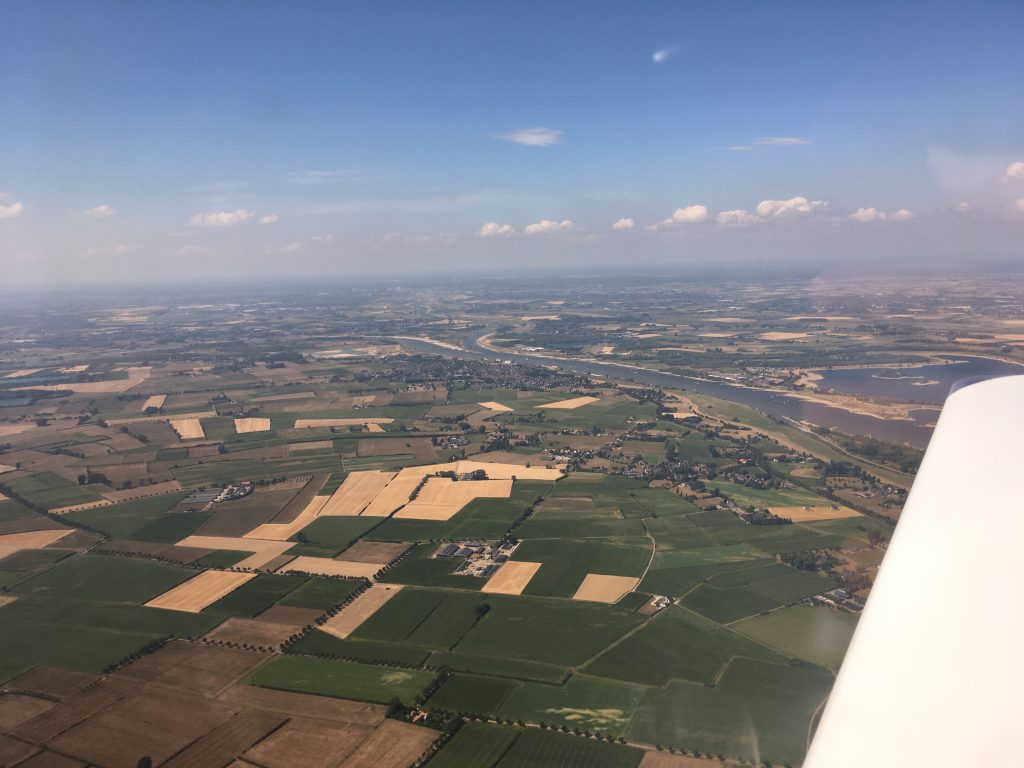 Not far to go now to Midden Zeeland: 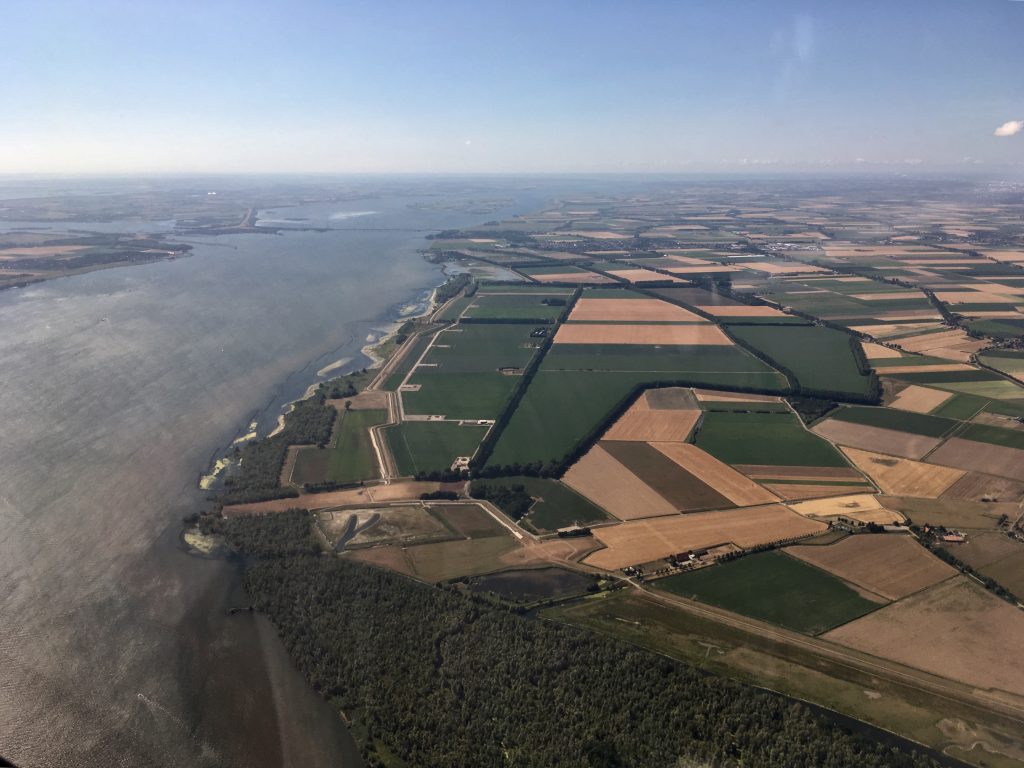 The grass runway at Midden Zeeland is delightfully smooth and a joy to land on. We were soon at the pumps. 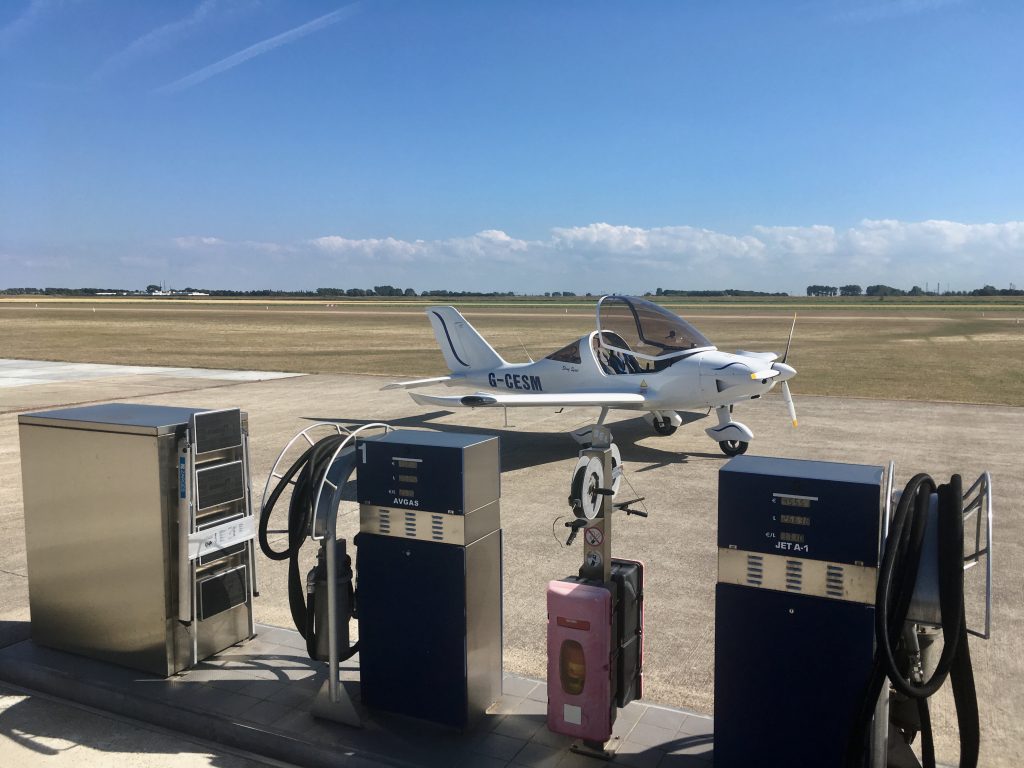 The restaurant looked quite busy with locals which is always a good sign. We would have loved to stay and sample the menu but once again it was a “splash and dash” so after paying, we were on our way. 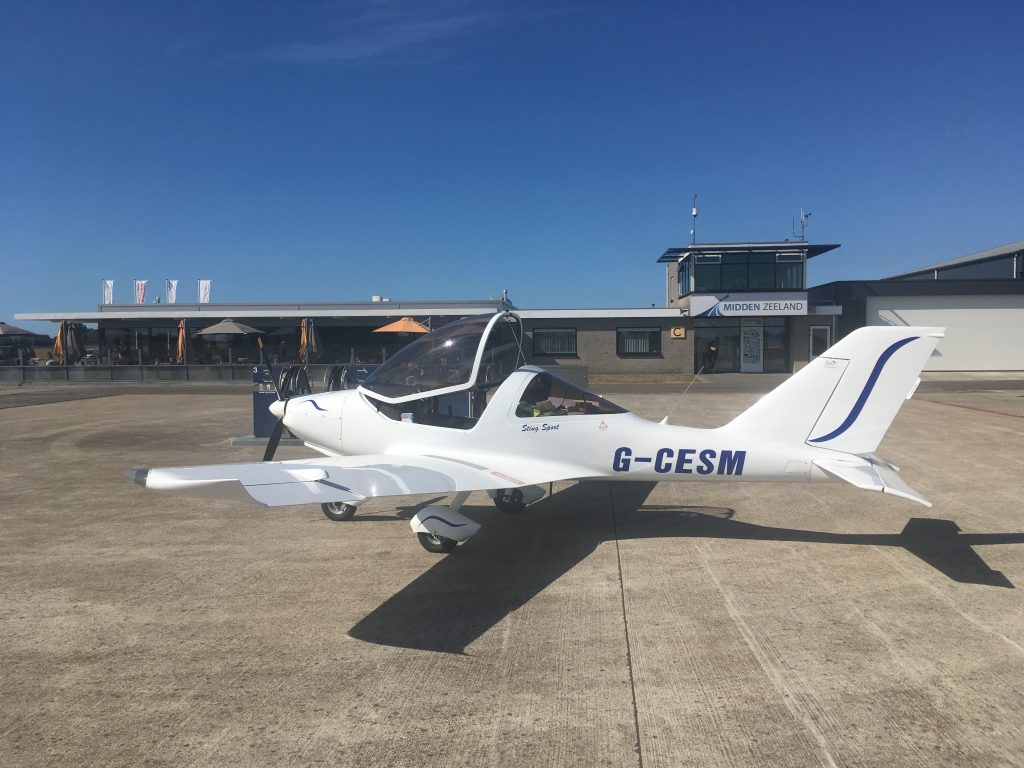 Pre take off checks in the run-up area. One of the nice things about foreign flying is noticing the small differences in things. Like the signs… 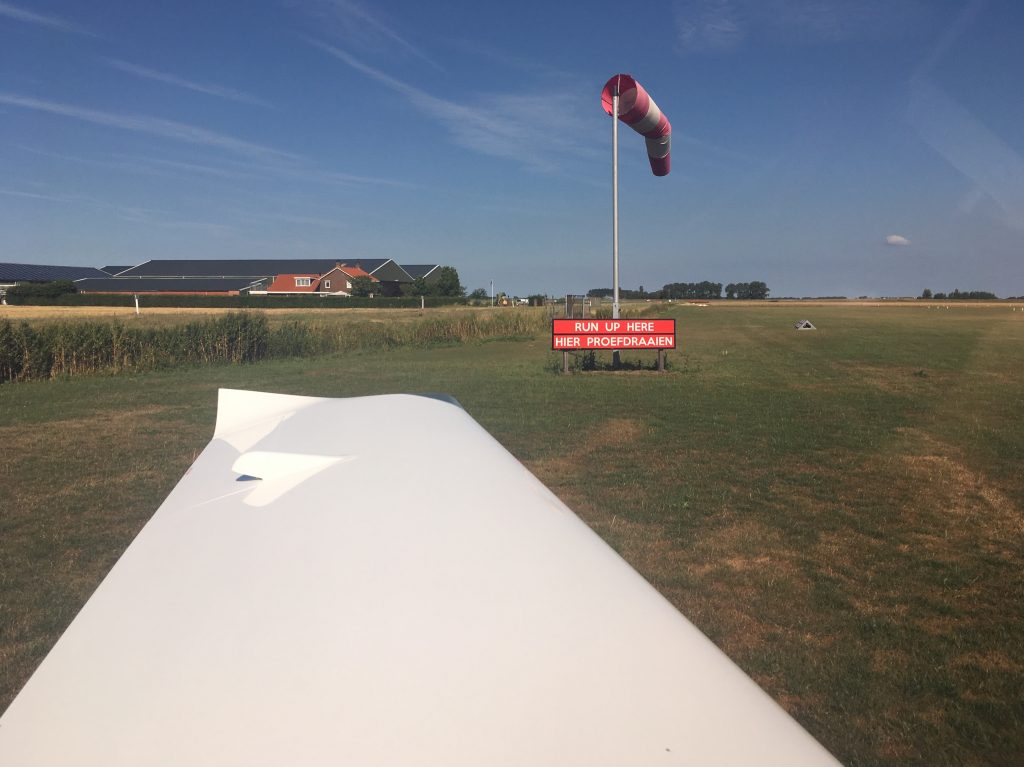 On a westerly take off from Midden Zeeland there is an immediate right turn of 45 degrees (if safe) to avoid a holiday park. This puts the aircraft straight out over the water, but to be honest there’s so much water there anyway it can’t be avoided: 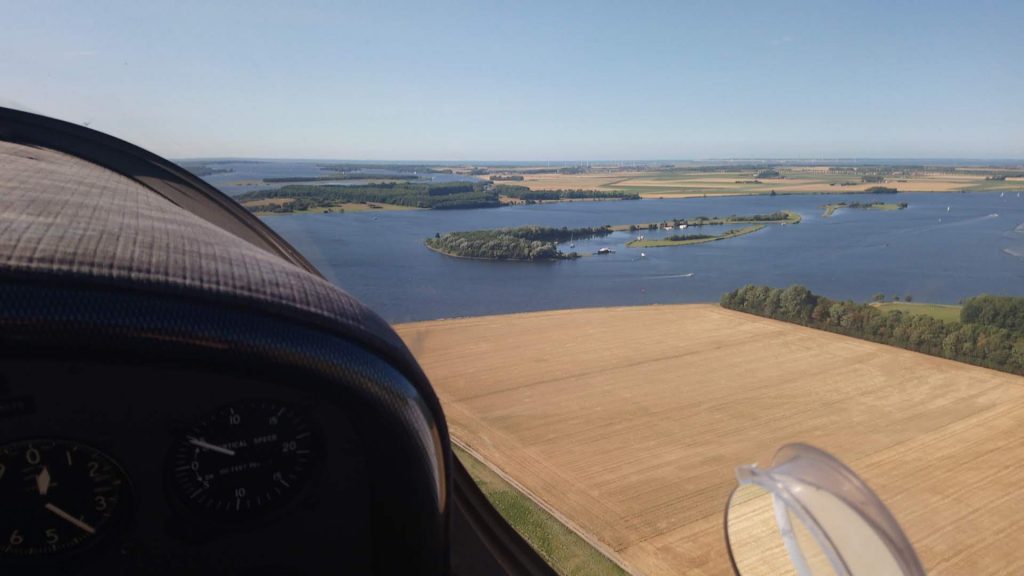 And then a turn to the south past the port of Vlissingen: 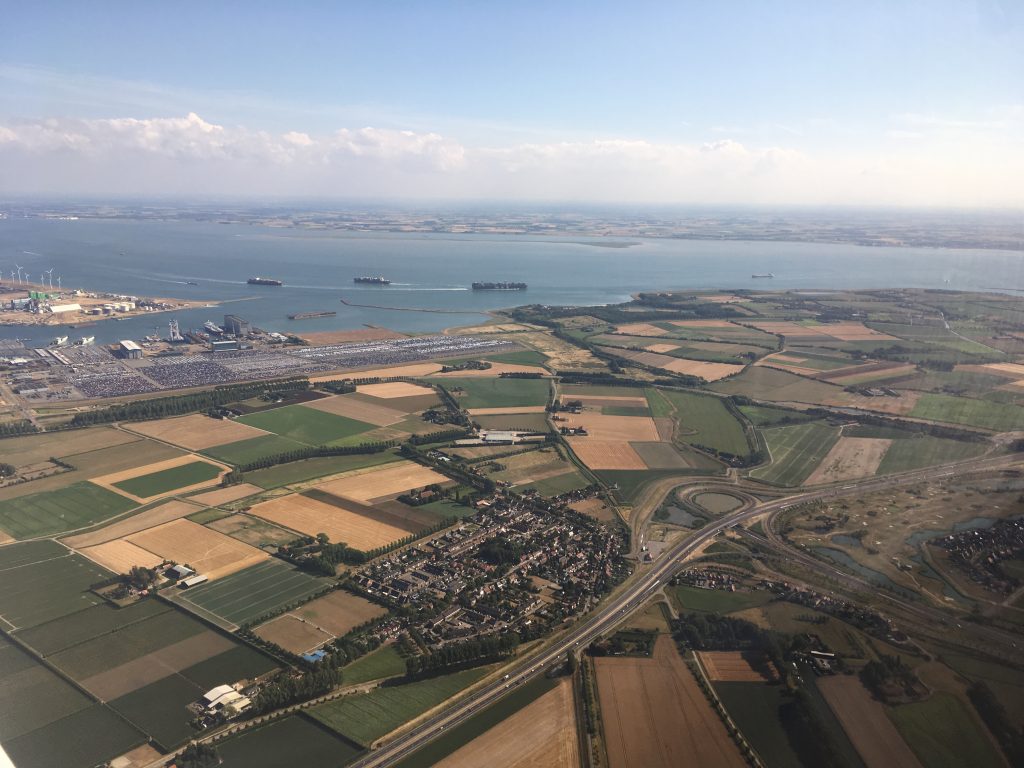 Climbing out past the shipping traffic to and from Antwerp: 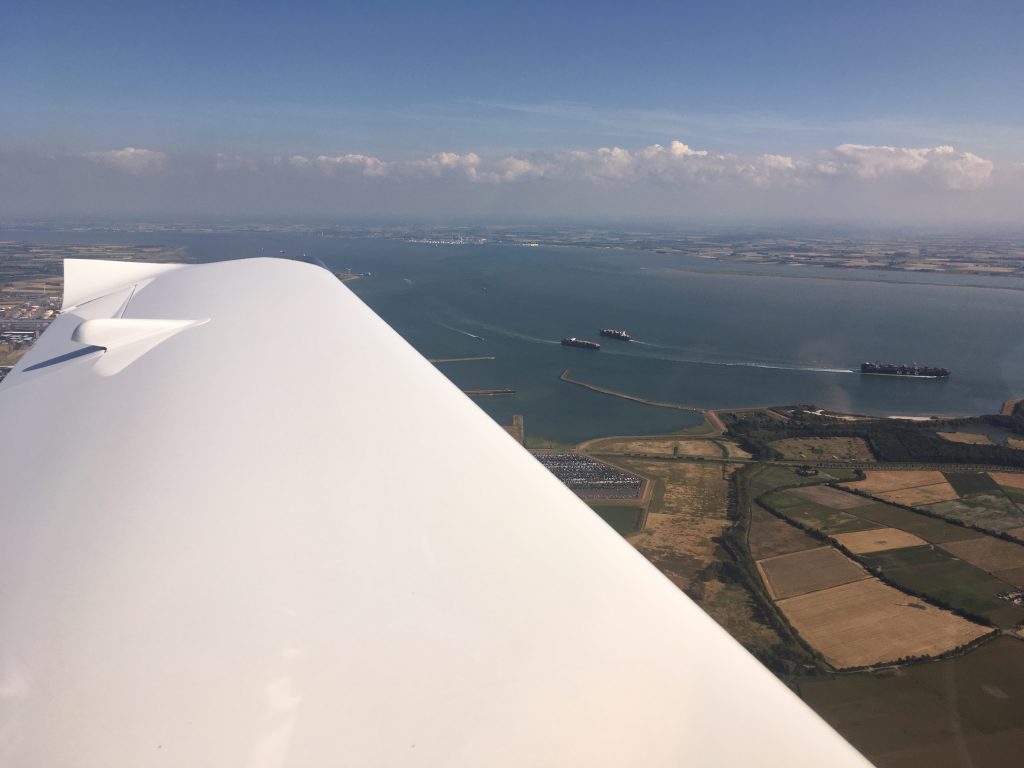 Back over dry land at the Dutch town of Breskens. Only two big bits of water left to cross: the English Channel and the Firth of Forth. But not today. 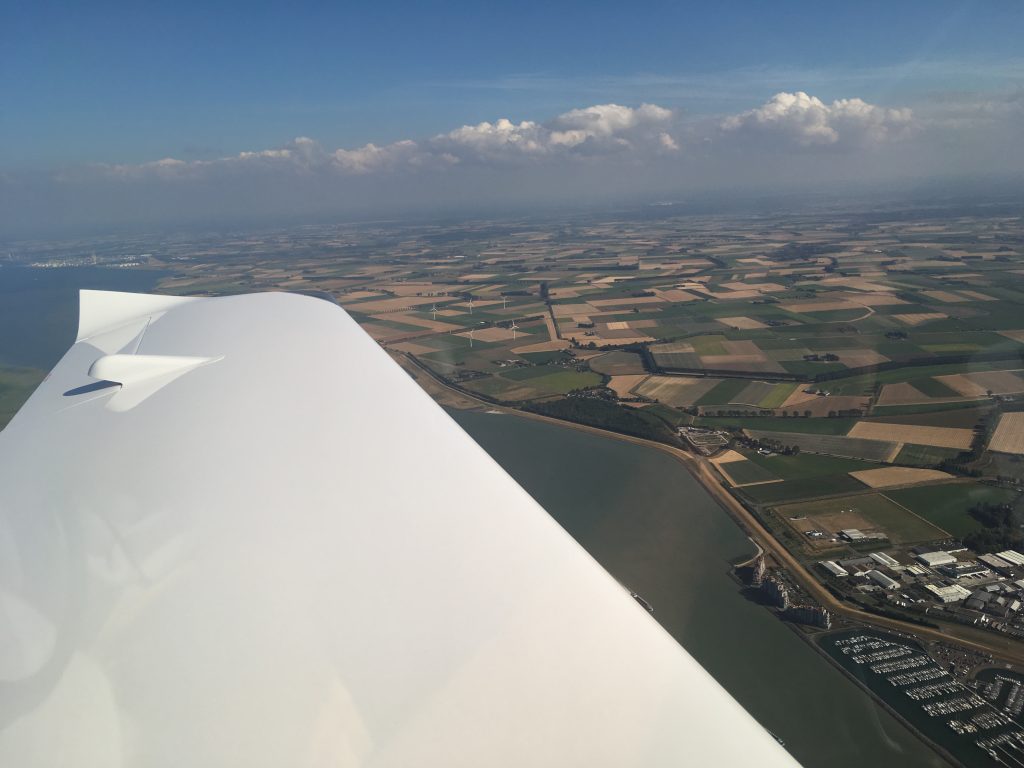 Belgium again! Crossing the border with Zeebrugge off in the distance: 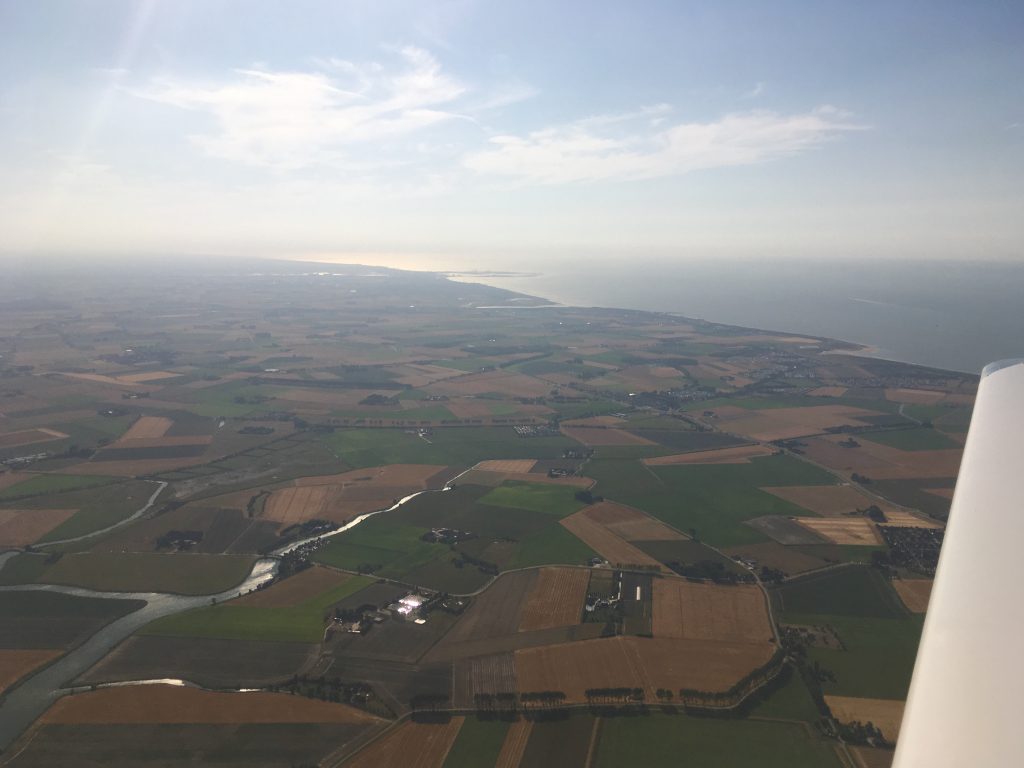 It was still a hot afternoon with thermal activity making it bumpy as we crossed Belgium towards Kortrijk: 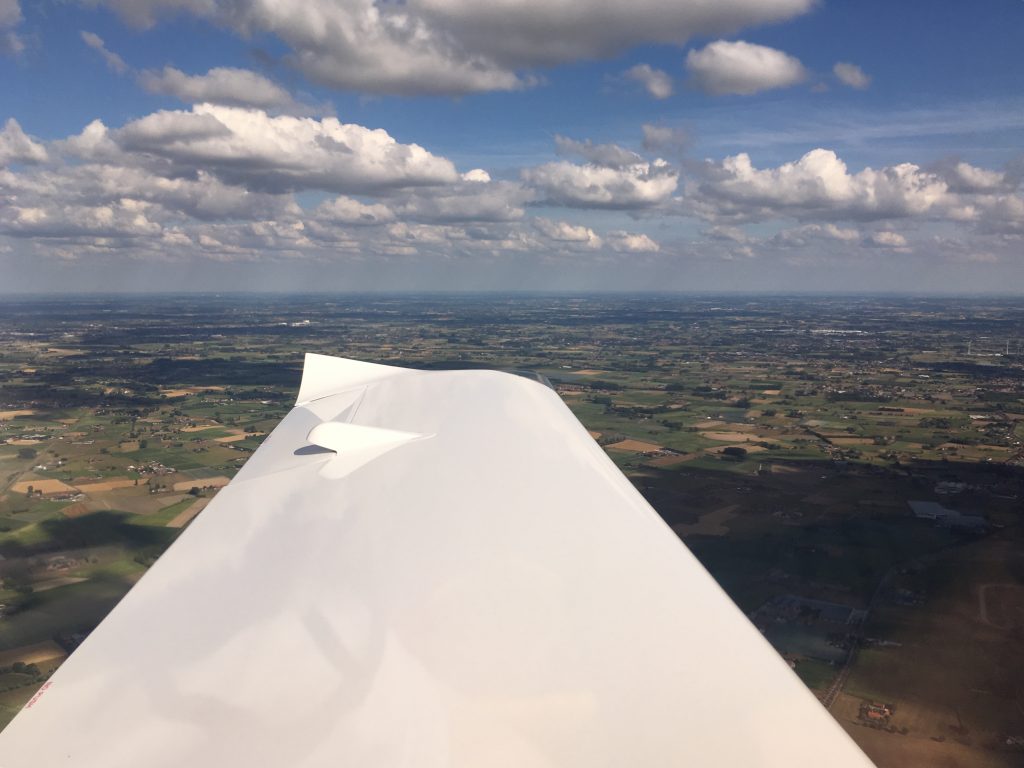 Once again avoiding the paradropping site at Moorsele we were soon established on a straight-in final for runway 24: 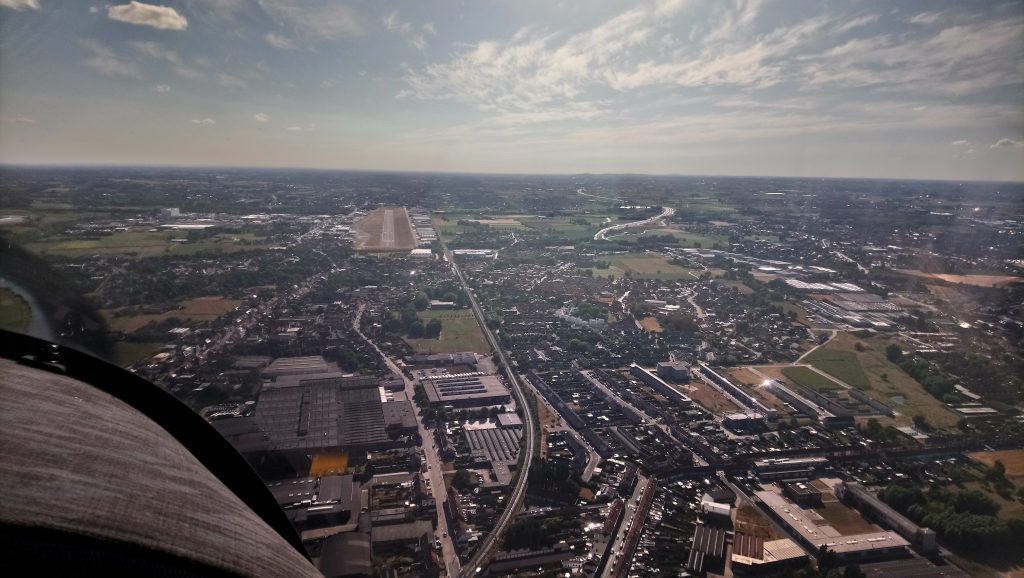 Finally. After a long day but the shortest leg so far, we put the covers on and found a hotel for the night: 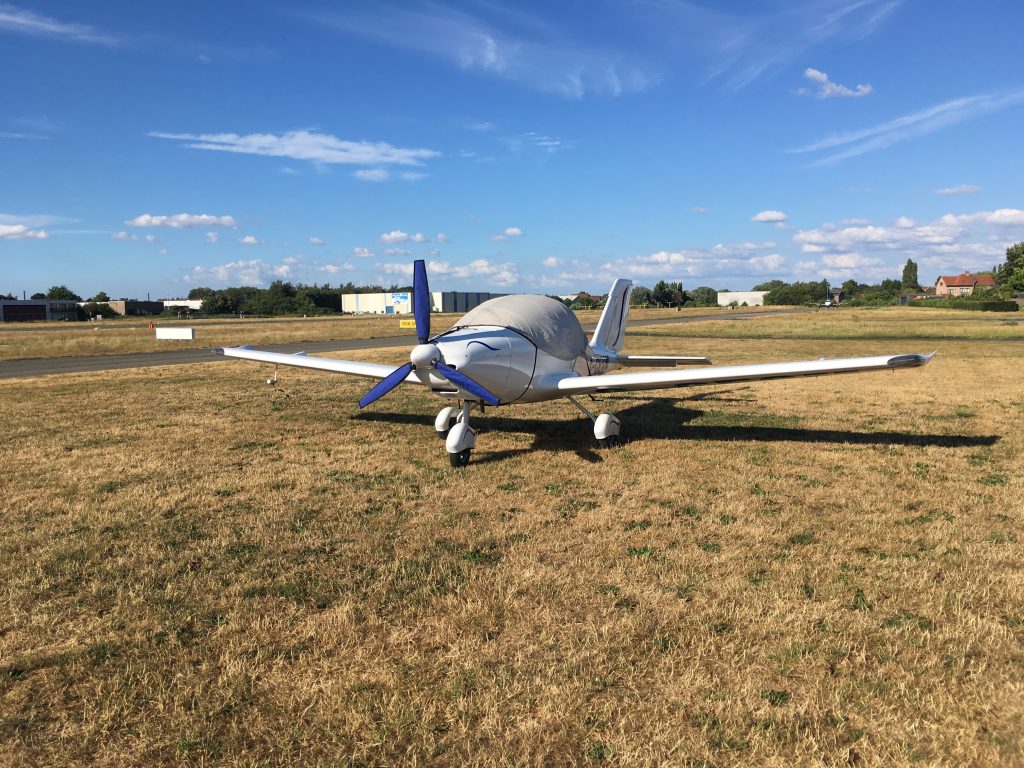 Brenda didn’t have to search too far… The Bell-X Hotel at Kortrijk is about 150 yards away from the front door of the terminal building! This is the view from our room, note the big “AIRPORT THIS WAY” sign. If we had been given a room at the rear of the hotel I’m sure we would have overlooked the aircraft: 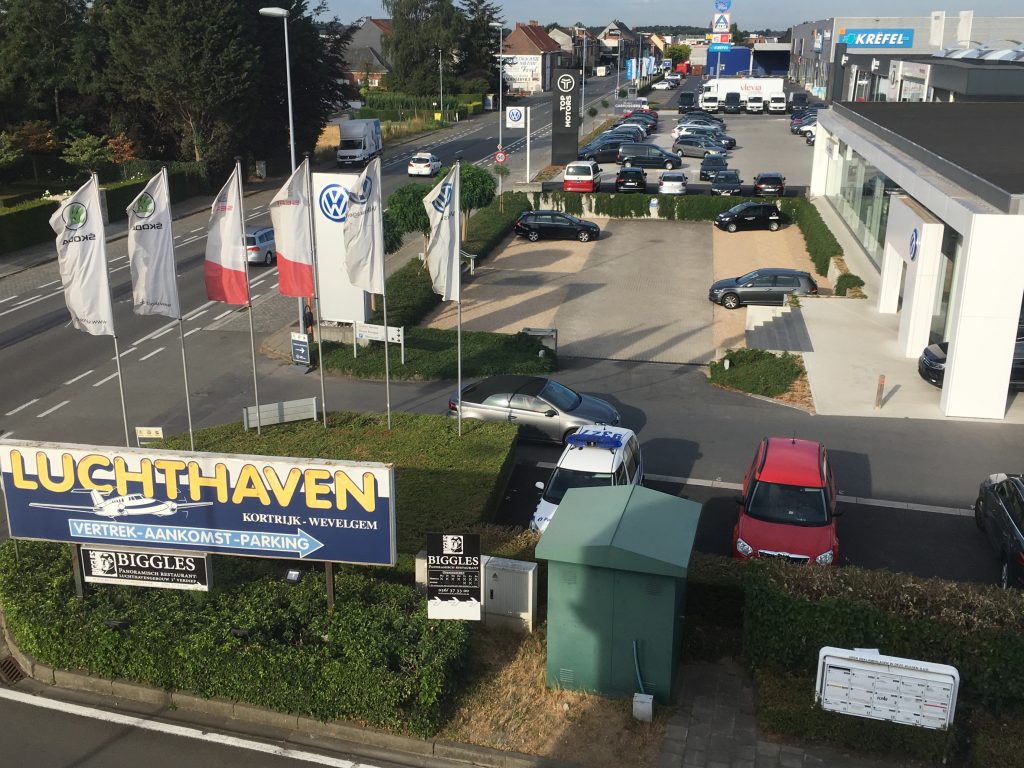 After dumping our bags we set off in search of sustenance, taking note of the architectural features on the way… 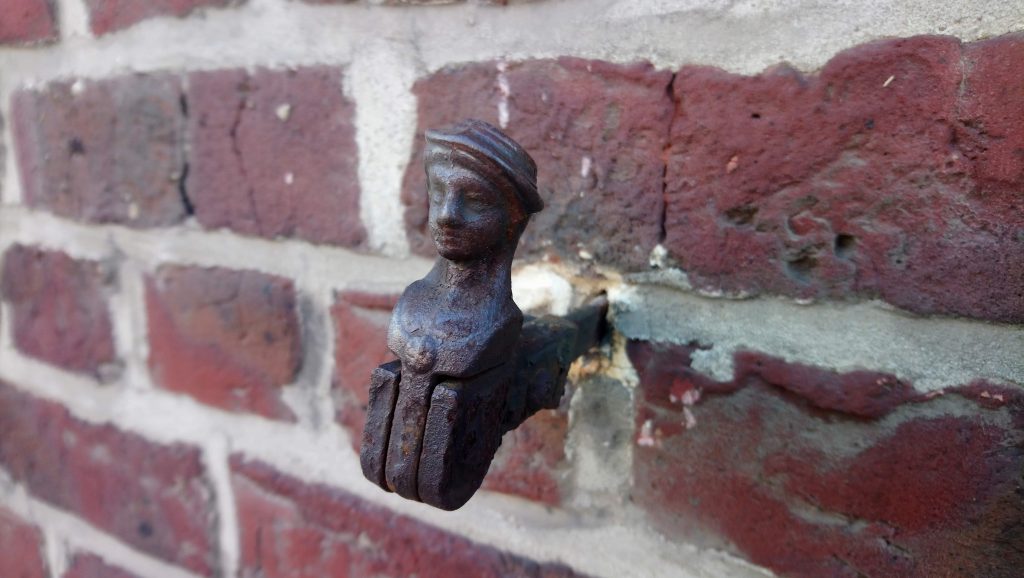 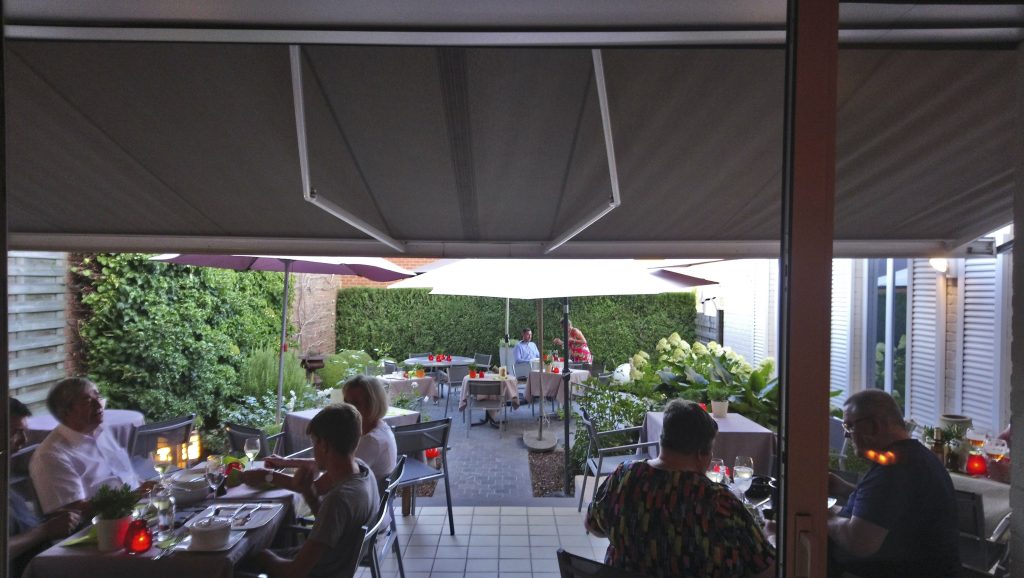 Then back to the hotel to plan tomorrow. It looked like we might be racing the weather back to Perth. The plan was Kortrijk to Rochester, Sandtoft, then a final leg back home. We would be starting from further away but it should be possible before the frontal cloud and rain arrived in Scotland from the west.

On that subject, due to night stopping at Kortrijk we didn’t get to our hotel booking in Rochester. Sadly it was a non-refundable booking so we lost about £80. In the grand scheme of things, adding up six days of fuel receipts, landing fees, hotels, taxis, pizzas etc £80 wasn’t actually a huge proportion. But it’s still £80.