Another trip out for lunch, this time to Carlisle where the cafe is good. I’ve eaten there several times in the course of the years, but we’ve never flown there in the Sting. 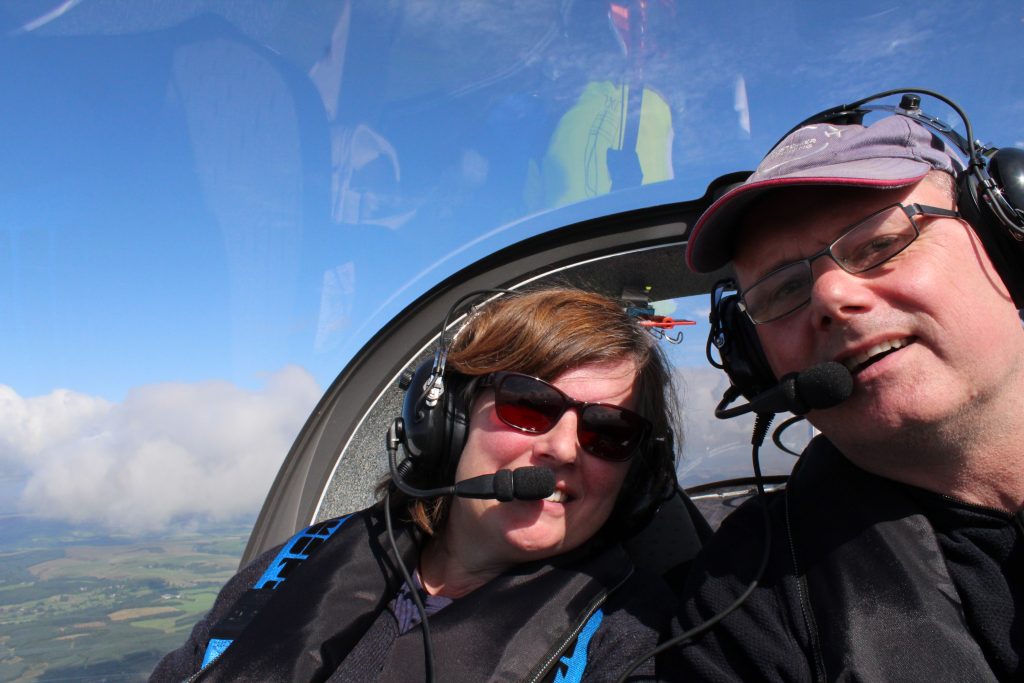 It started off as a lovely day with sun patches and high cloud, well clear of the tops of the hills. We set off from Perth across the Kingdom of Fife to Elie, where we struck out across the Firth of Forth to North Berwick. Lifejackets mandatory, although we were never out of gliding range of land. 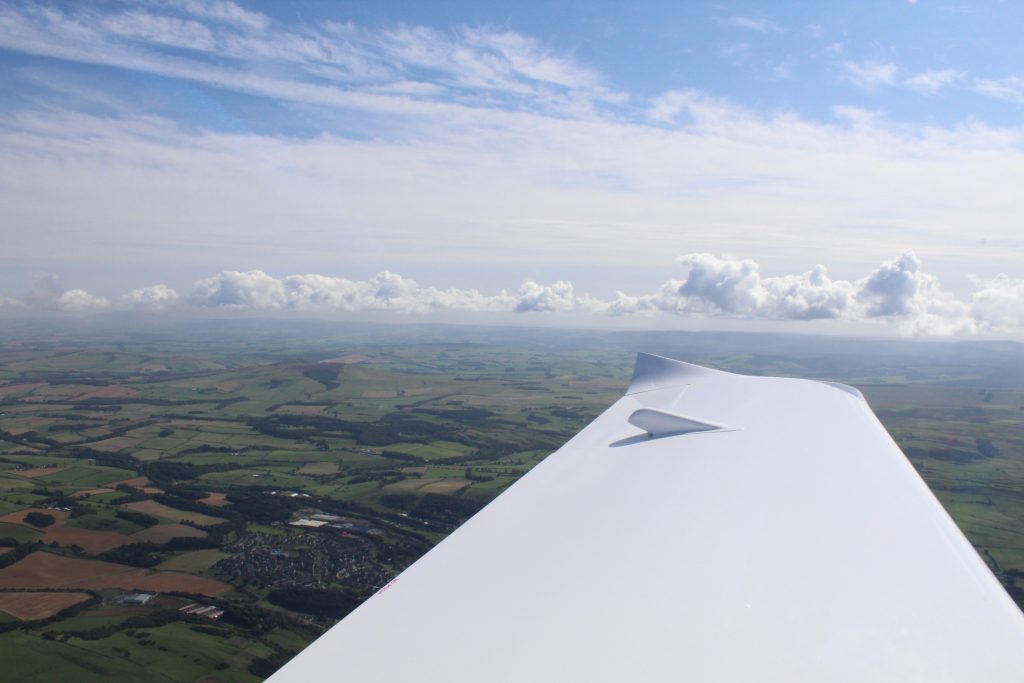 Then down to Galashiels and Hawick before turning for Lockerbie, the routing chosen so as to avoid Edinburgh’s controlled airspace and the danger area at Spadeadam. The nice folks at Scottish Information on 119.875 offered to arrange a direct routing crossing the range but we were sightseeing and declined, while expressing our appreciation of the offer. Always be polite to the folks on the other end of the radio! 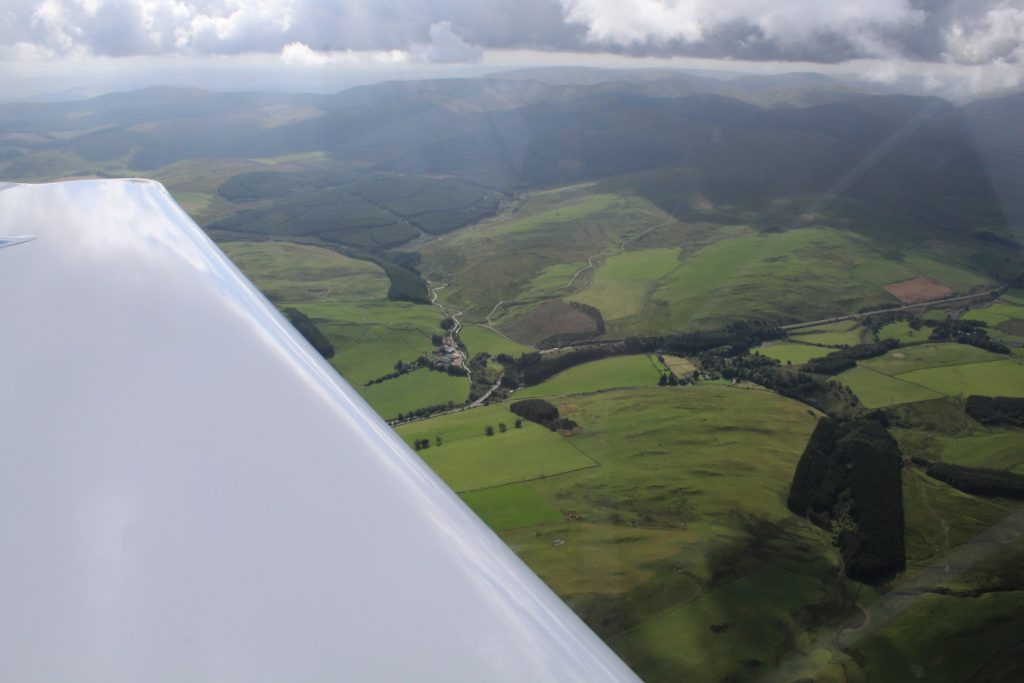 There was a bit where the cloud lowered a tad, but we always had an escape route and plan…and after a while the Solway Firth was visible in the distance: 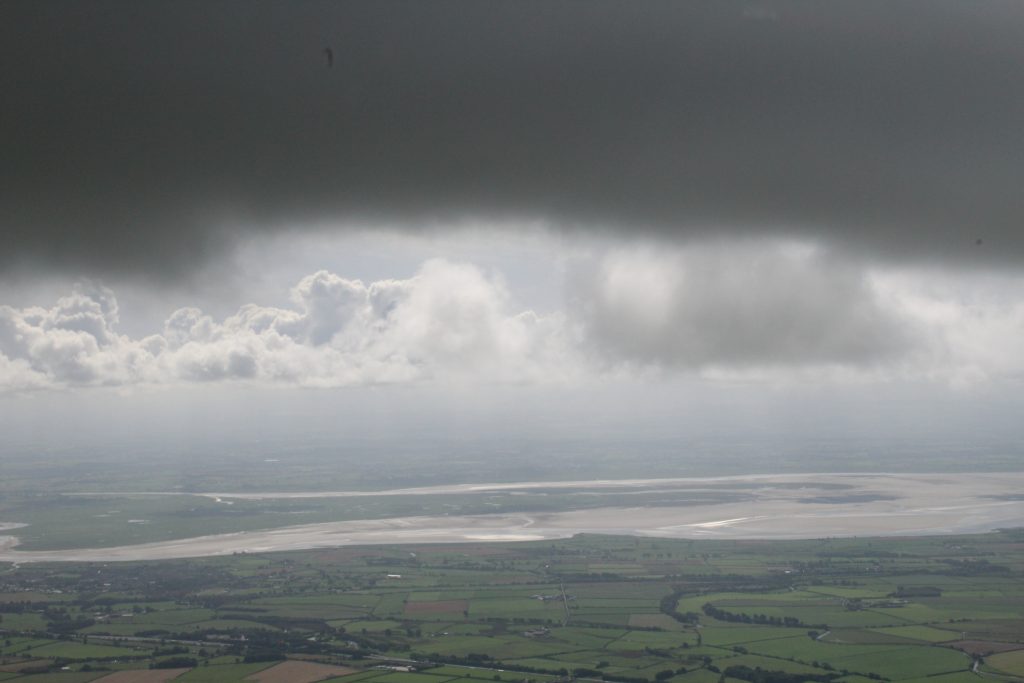 Carlisle was quiet with one aircraft in the circuit, and we were soon down and directed to “Taxi to stand 2A” – just like being back in an airliner. The controller called us a TB20 rather than a TL20. A TB20 is a serious long distance 4-seat IFR touring machine. Maybe we’ll upgrade? 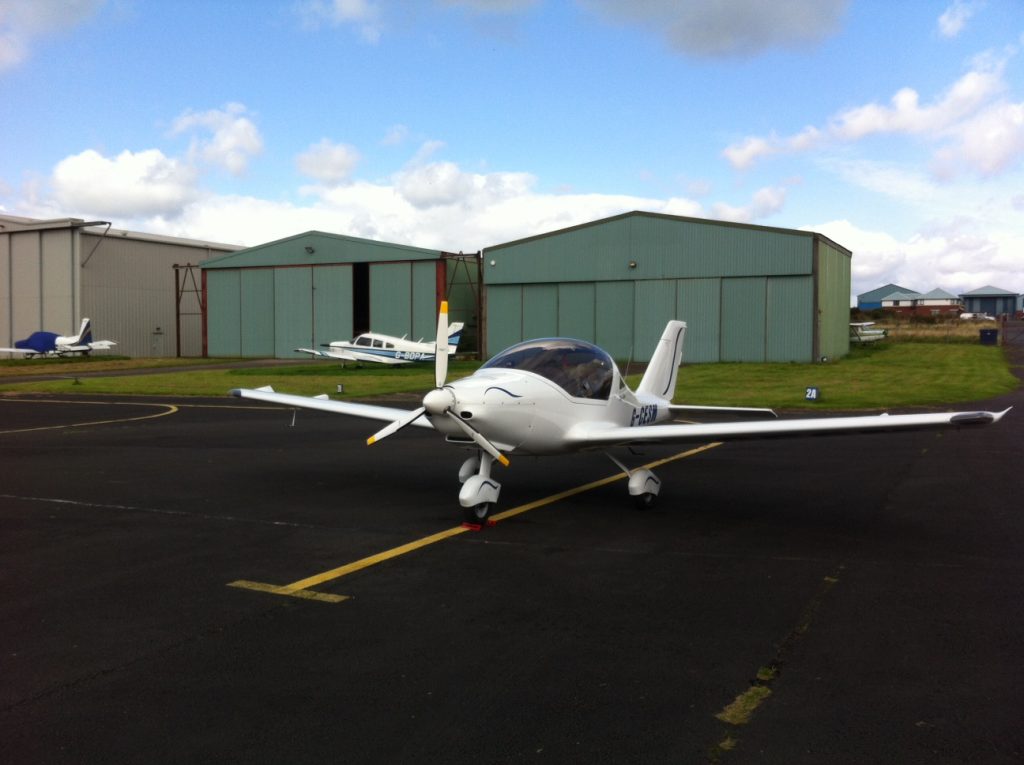 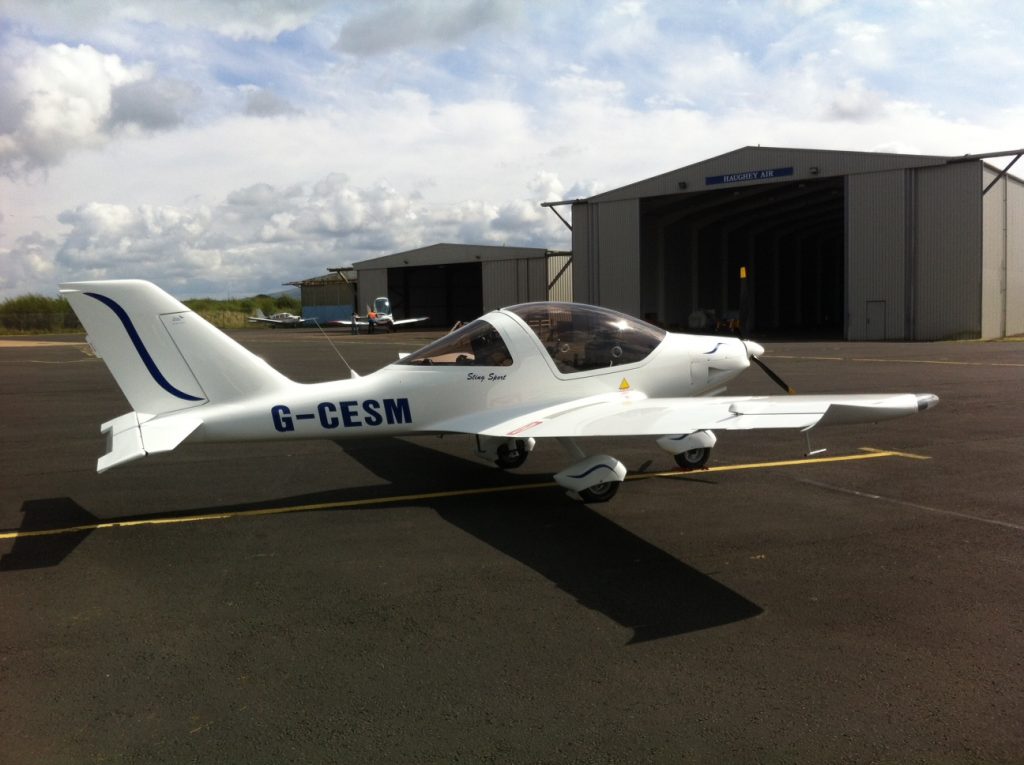 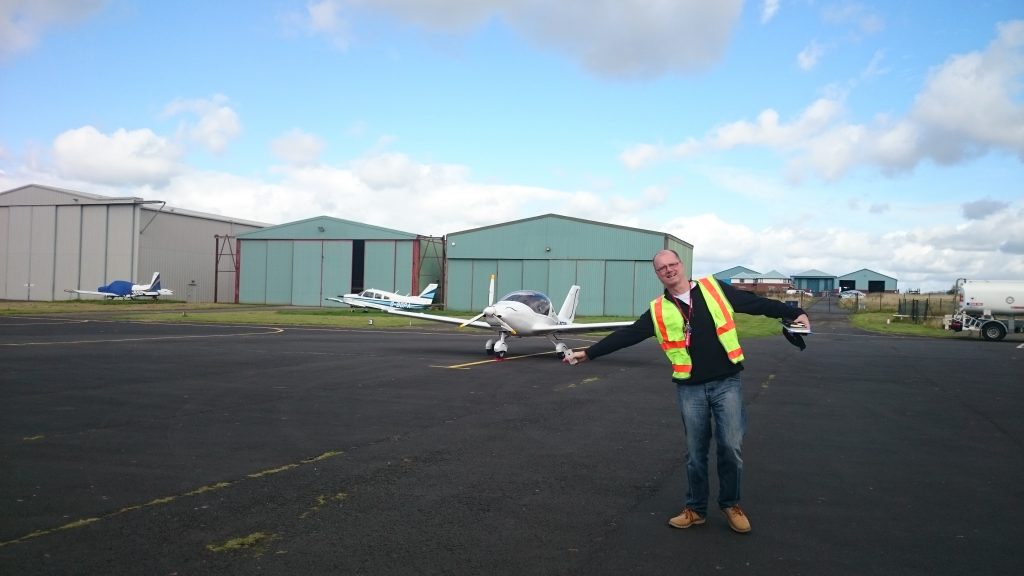 During lunch I noticed my old Air Force instructor pinned to the wall, not literally but in a frame. Andy taught me to fly the Jet Provost at Linton-on-Ouse in North Yorkshire…a long time ago! 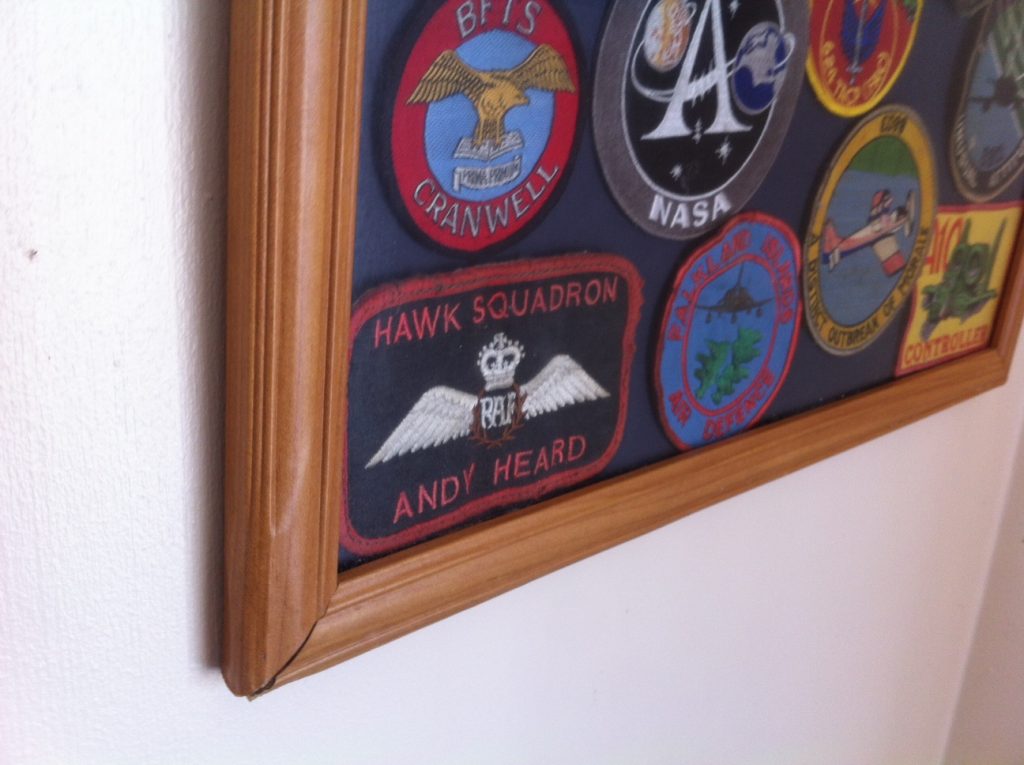 And after lunch we found that an old open-cockpit Stearman on its way to the Scottish Air Show at Ayr seafront had popped in for fuel and was parked on the stand next to us. The lady flying it was looking slightly windswept as she left operations for the cafe… 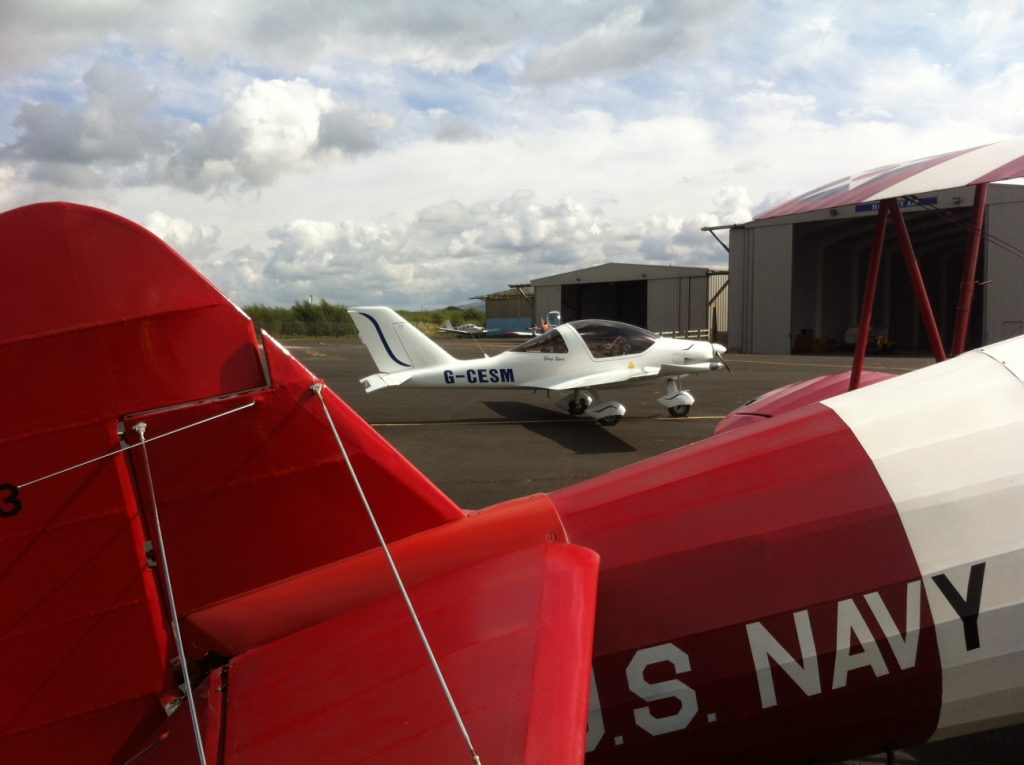 The Carlisle landing fee was surprisingly economical. Having paid £15 at Fife and £15 at Cumbernauld we were expecting an airport with lots more facilities including real air traffic controllers to be more expensive. It was actually just over £10. We’ll definitely be going back.

Tenner paid we started up and made our way to the runway behind the club PA28 Warrior which was off on a solo training flight. ATC let us both taxi down the runway to the end, where we held position while he took off: 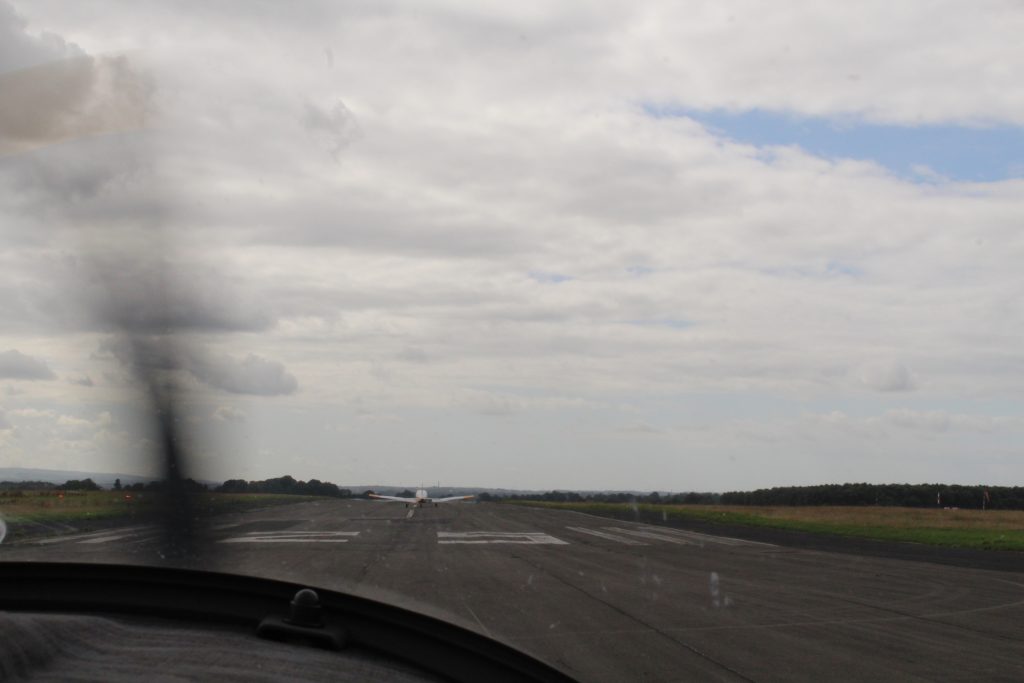 The return route was east towards Newcastle then north up the coast. Brenda asked me why I like flying. I couldn’t tell her but I could show her. Some views from the trip north… 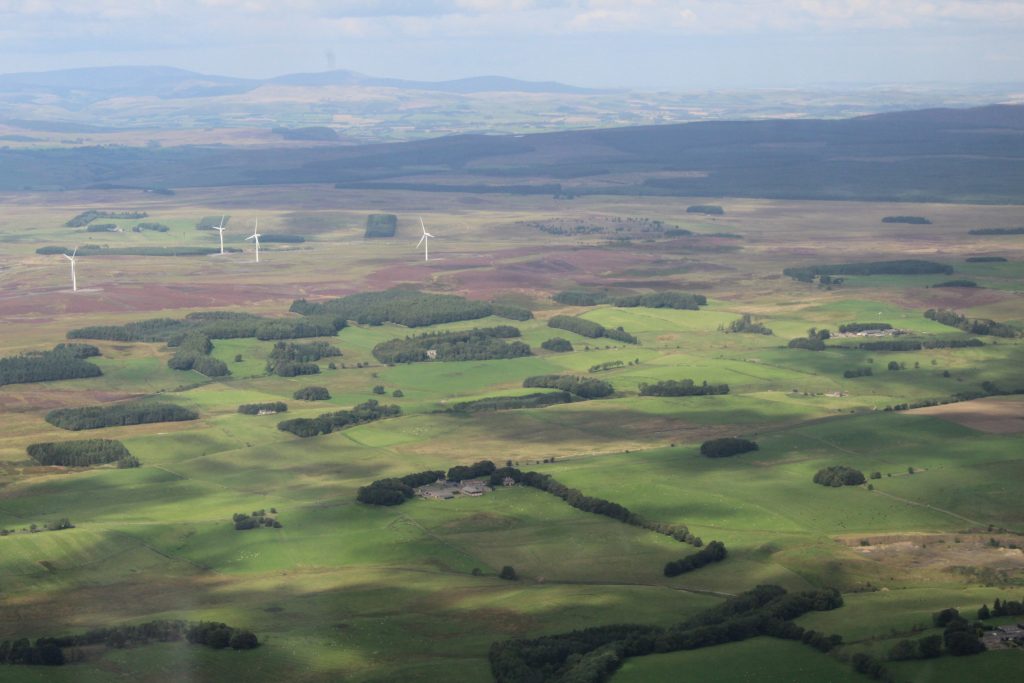 The former WWII airfield at Brunton: 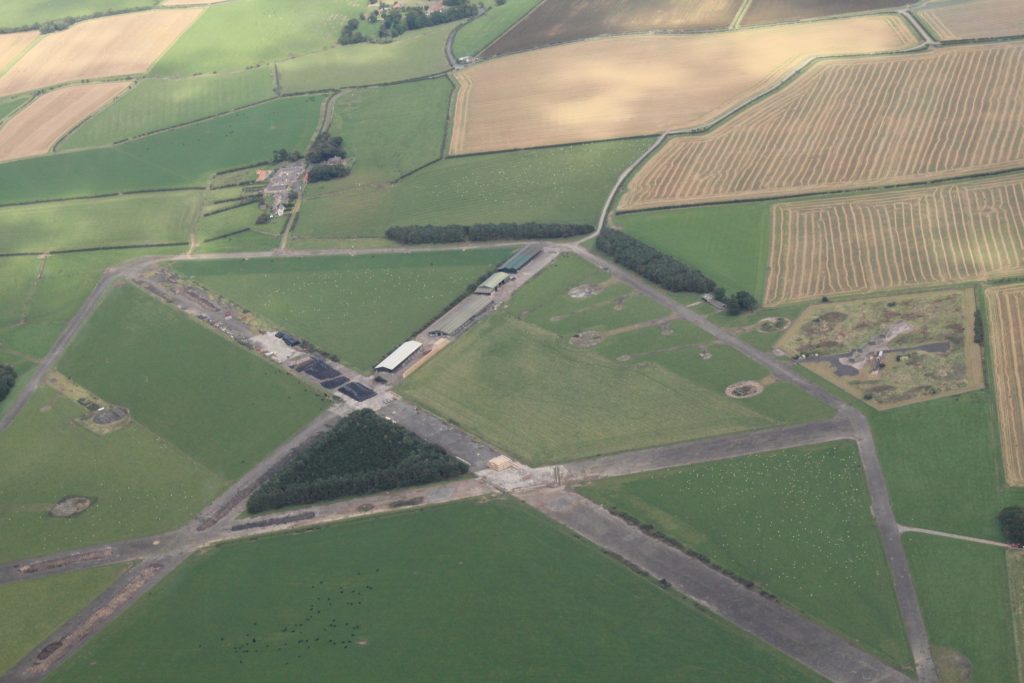 The sun shining on the righteous: 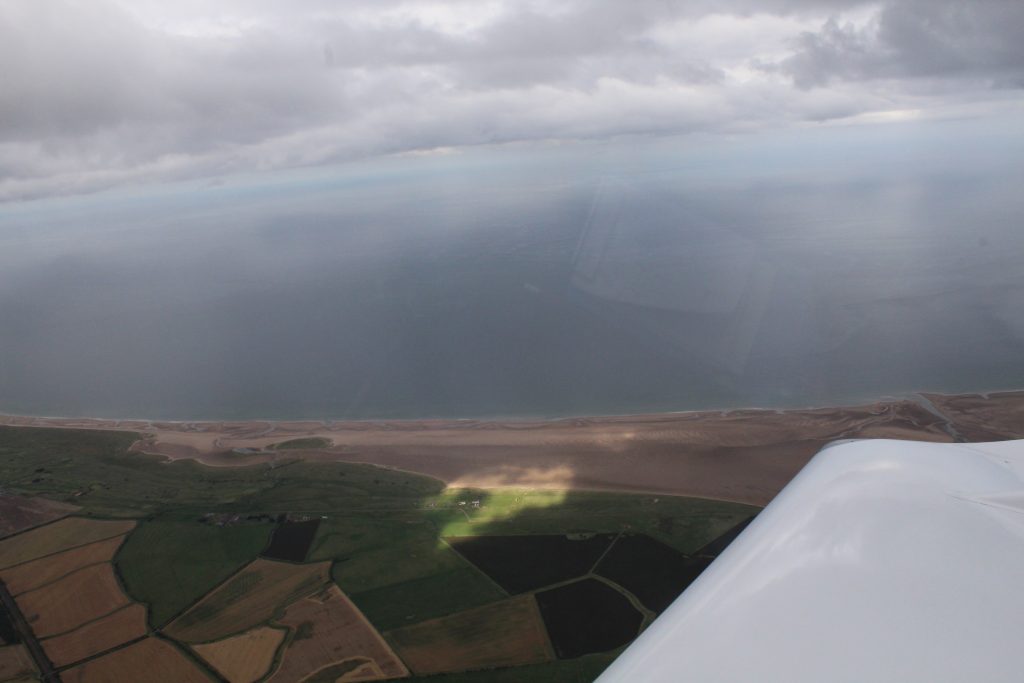 Berwick upon Tweed (in the rain): 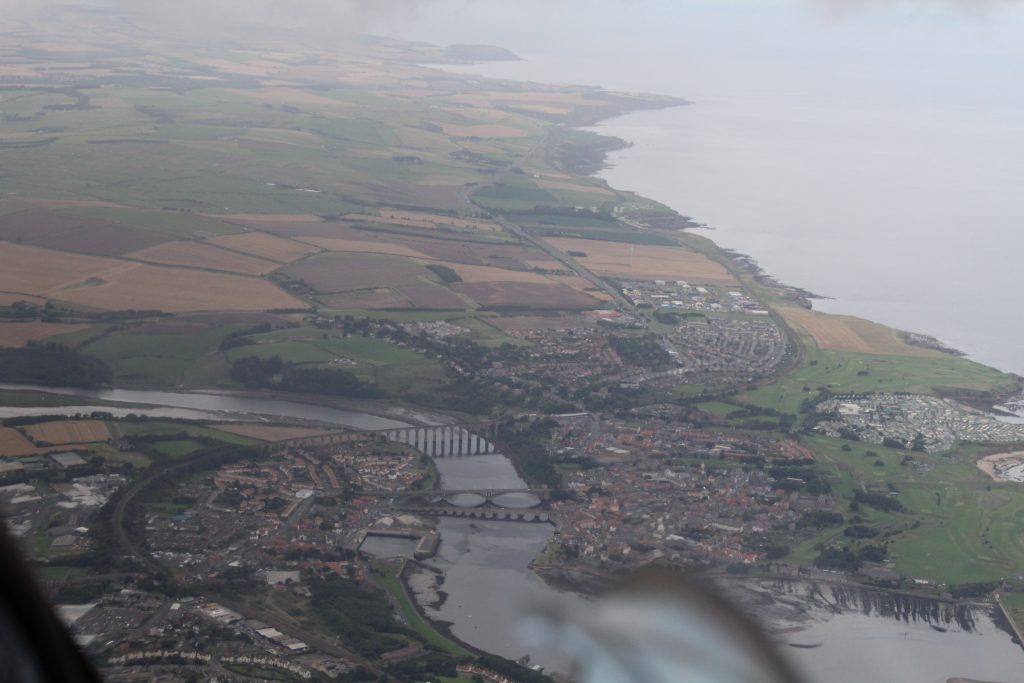 After Berwick the rain cleared. Here’s the bird sanctuary of Bass Rock: 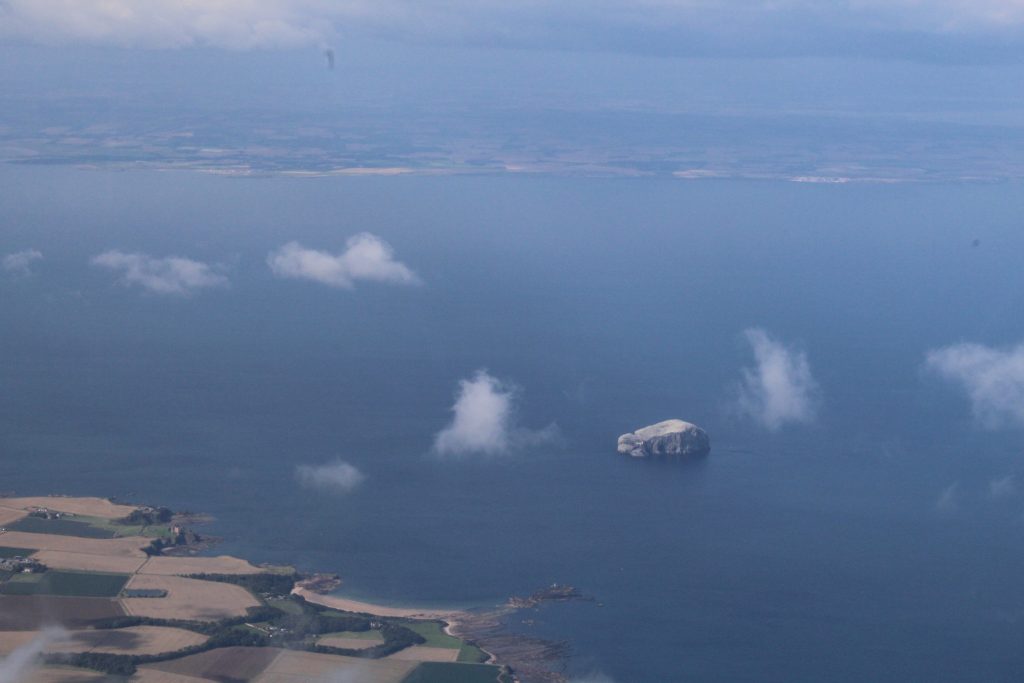 Crossing the Firth of Forth again northbound, with the three bridges (all now in use – the new one has just opened!) just visible way off in the distance: 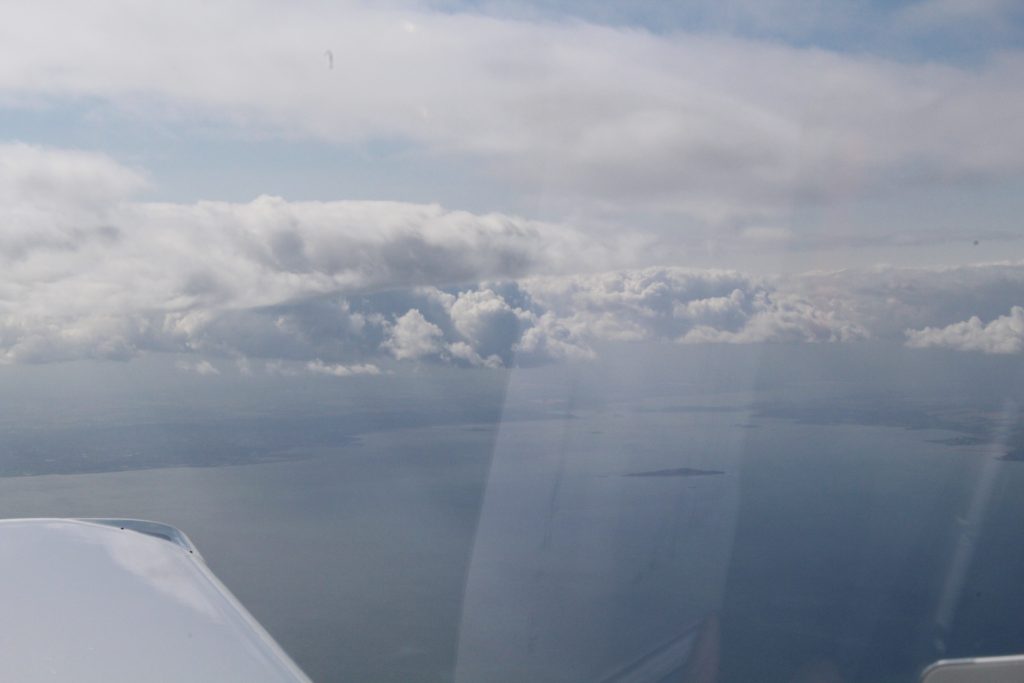 And finally back to Perth after about two and a half hours flying, no refuel required at Carlisle. The fuel capacity and efficient engine can make for some serious distance covering ability. 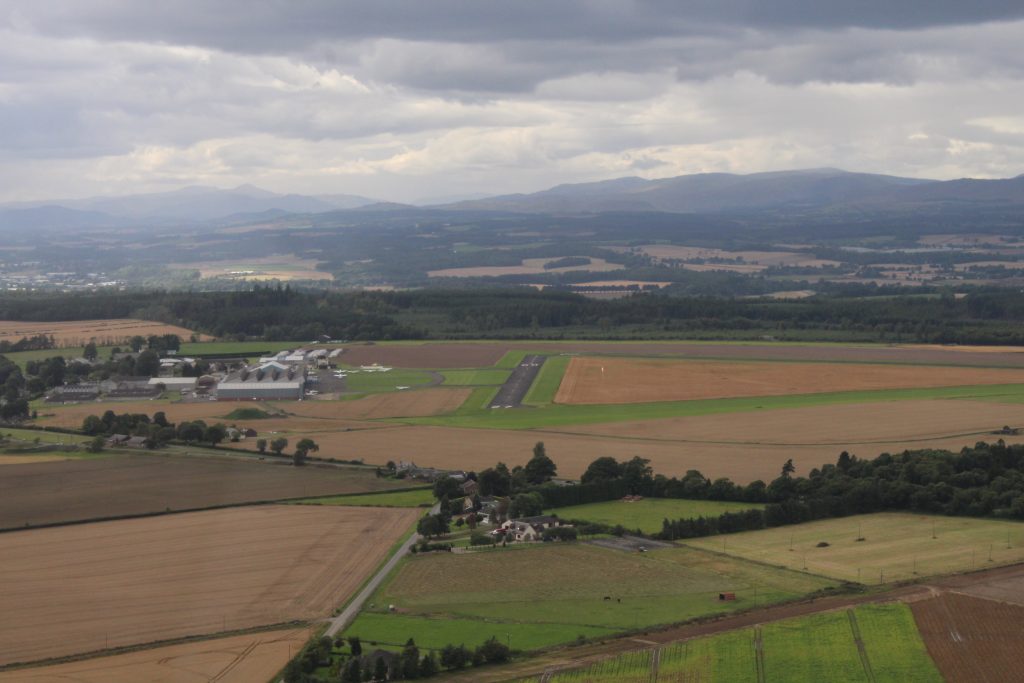 Short final for runway 27 with the windsock showing a slight crosswind from the right. Last time I landed here the crosswind was from the left and from that direction it curls over the hangars and can produce some “interesting” turbulence and wind shifts just when you don’t want them…luckily the landing was smooth. 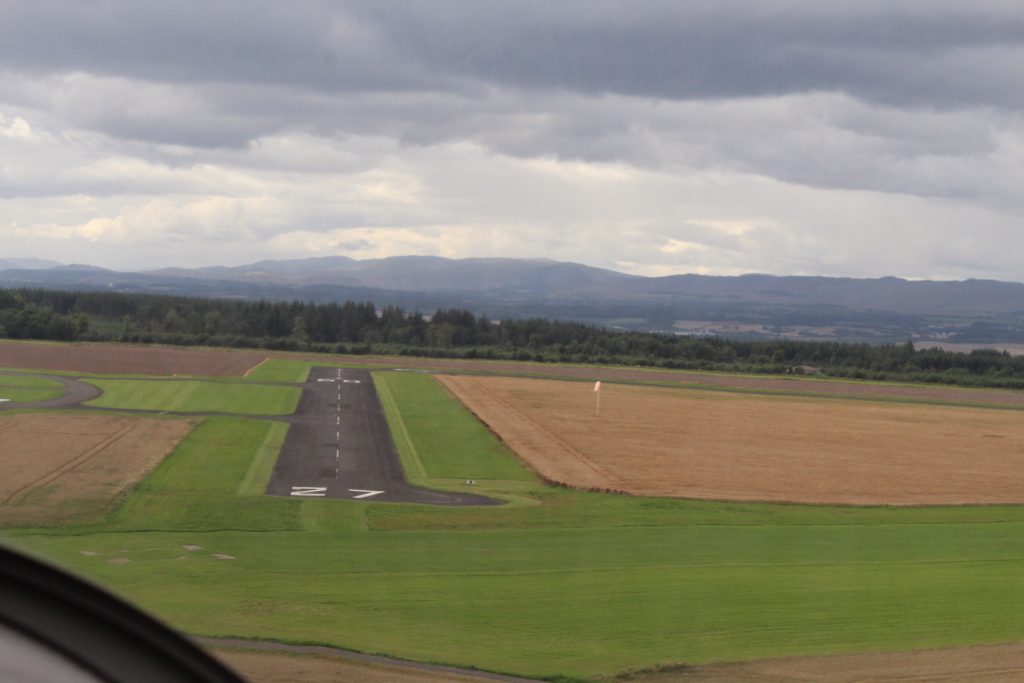