So here we are. Cut off at home due to the so-called “beast from the east” storm. Up here in Perthshire, it’s called “winter”…but we’re still kind of stuck: 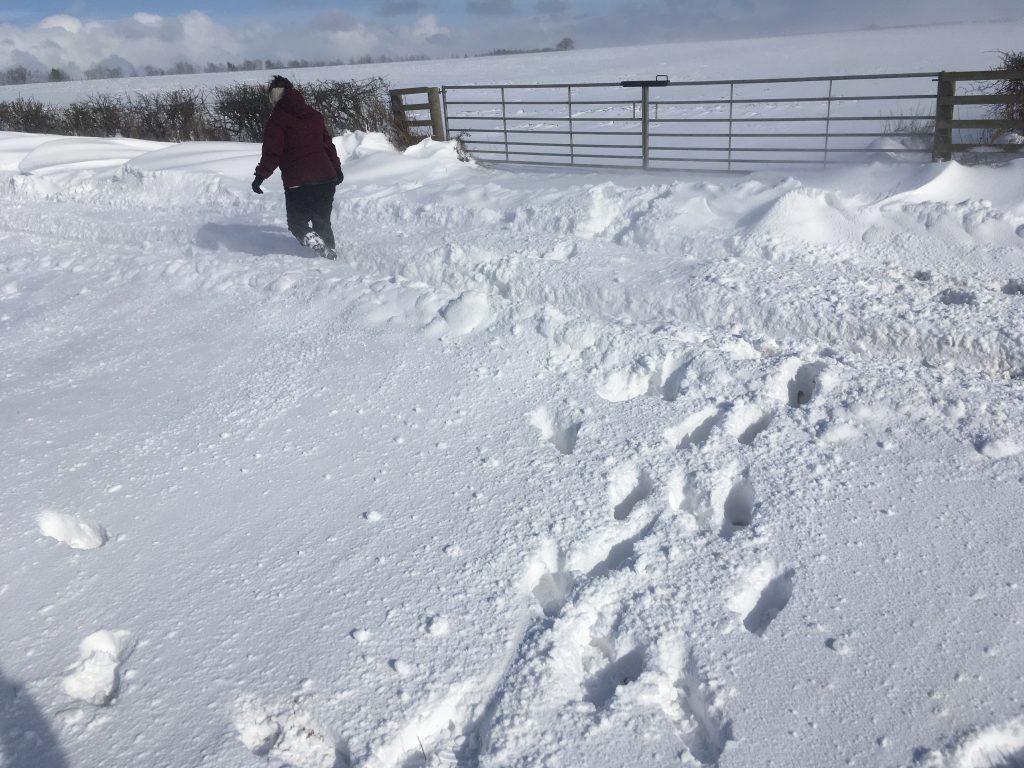 I’ve just completed a run of four 12 hour day shifts, and flew for the grand total of zero minutes! This screenshot of the radar picture from http://www.rain-alarm.com shows the snow showers marching through on the strong easterly winds, and these forced us to keep the aircraft in the hangar. 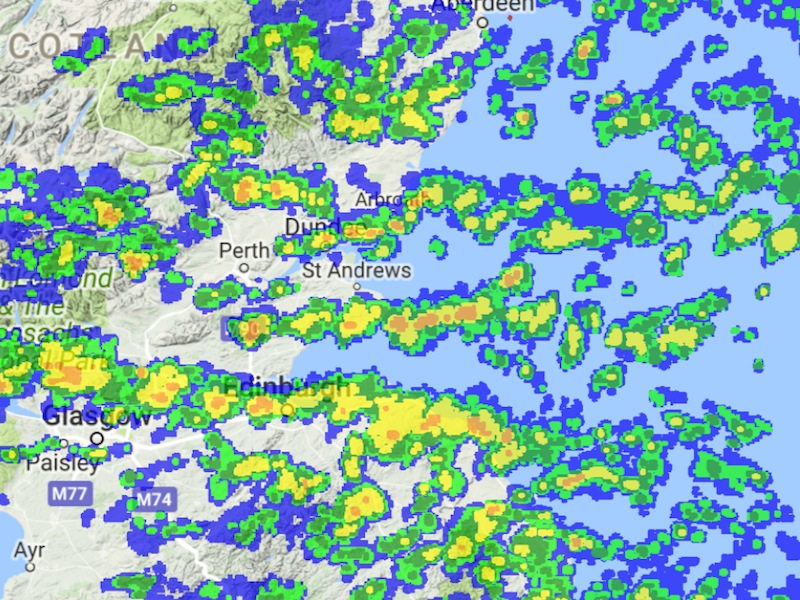 If really needed it is faster to take the aircraft out of the hangar than it is to take off all the blanks, covers and blade tie-downs which are required if we leave it on the pad.

We got caught out in the last snow. OK, I got caught out, because I made the decision… a little snow shower passed through then the radar showed a nice gap, so we got the aircraft out onto the pad, went inside and put the kettle on. Ten minutes later it was hissing down with snow again.

The Flight Manual for the Eurocopter EC 135 T2+ has this handy section about de-icing the aircraft, and I quote:

“Place the aircraft in a warm hangar” 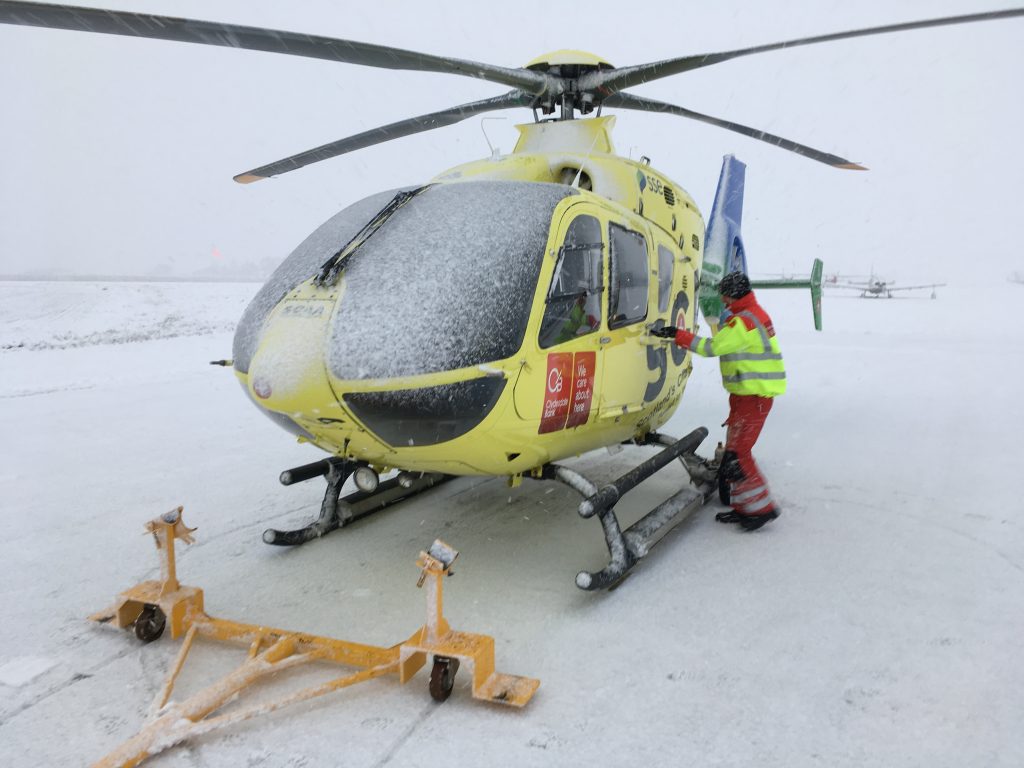 So that’s what we did. Eventually. It was so slippery that the tractor jack-knifed and was losing grip and steering. We ended up with a paramedic sitting on the tractor front to aid grip, one inside the aircraft to stop it tipping up, and two engineers (who don’t even work for us and are from a totally different company!) pushing on the skids. The aircraft didn’t come out again that shift and when I did the daily check in the evening it still had ice and snow on the roof. Maybe the hangar isn’t that warm after all!

Sometimes we DO get to go flying, and after the snowfall the views are fantastic. Here we are on the way north towards Aviemore and the Cairngorm Mountain ski resort… 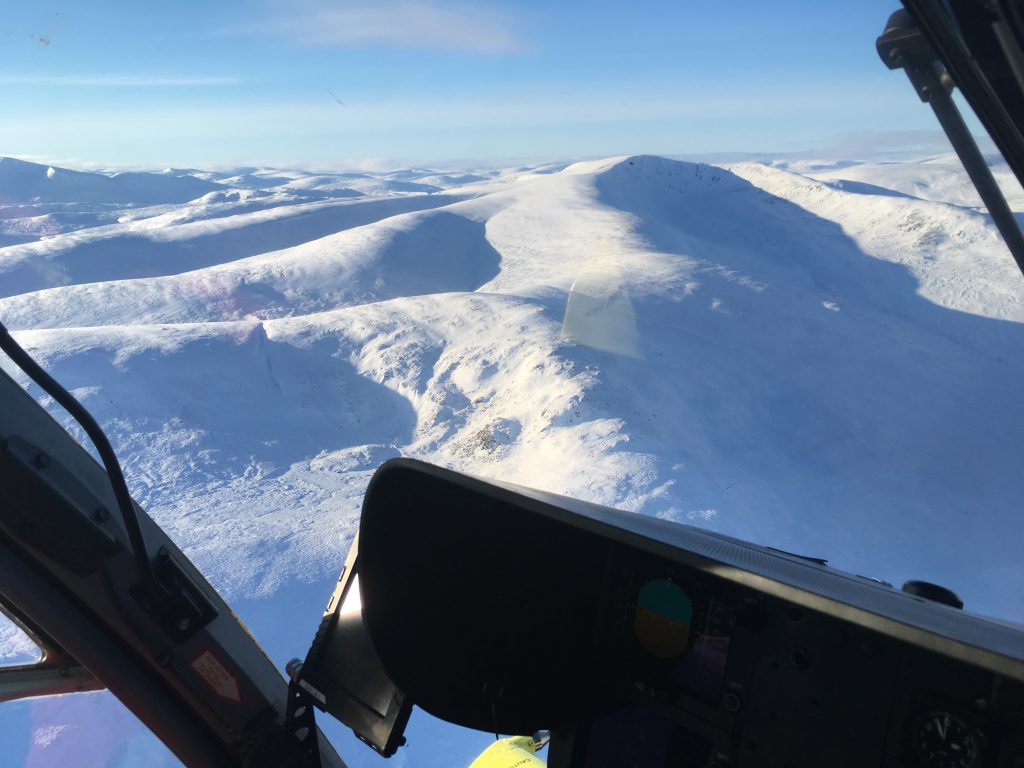 …where we picked up an injured snowboarder (from Australia!) and flew her to Inverness for treatment. 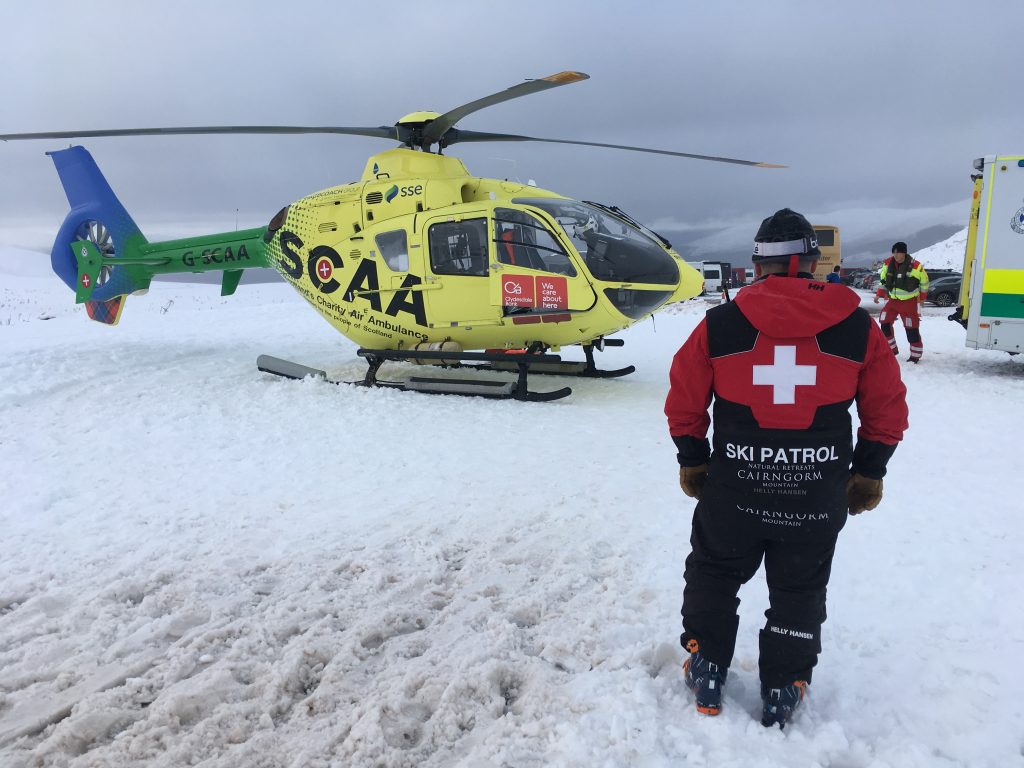 The next photo take by Pete in the tower at Perth shows one of the hazards of operating a helicopter in fresh snow. The downwash kicks up the powder into a huge cloud which can then get sucked back down by the blades and recirculate, causing a white out, loss of visual references and disorientation and arriving on the ground in an uncontrolled manner, ending up in a “snotty heap” (Technical term).

Here’s Nigel demonstrating a higher than usual hover taxi height to reduce the threat. Military helicopters in hot places experience the same phenomenon, only out there it’s called brown-out and the cloud kicked up is slightly more abrasive – think sand blasting. 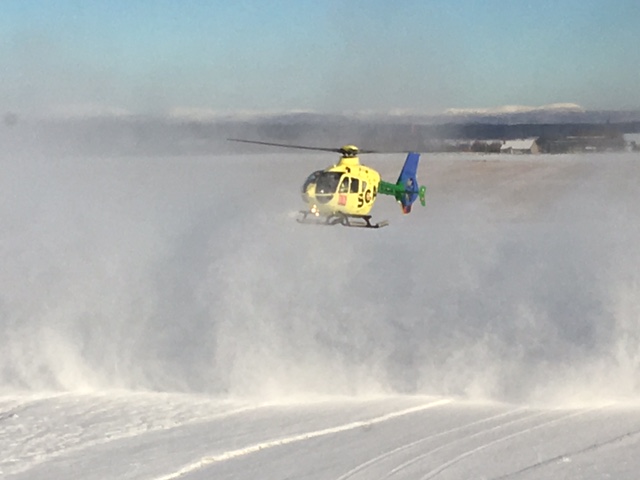 It can be a little boring sitting at work with the aircraft in the hangar. At least the paramedics have the response car so they can get out and do their job, but the pilot just has to check the weather and look at the snow showers.

Once it stops snowing though, the fun starts with the tractor and snowplough, clearing the apron area around the hangar so that we can operate from there if needed. 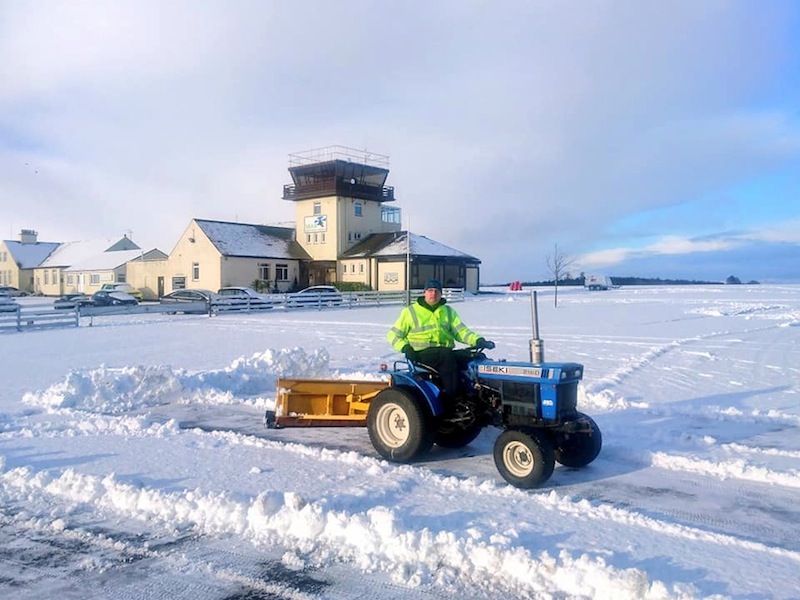 …although the drifting snow does tend to cover up things which are easily broken by snowplough blades. Oops. 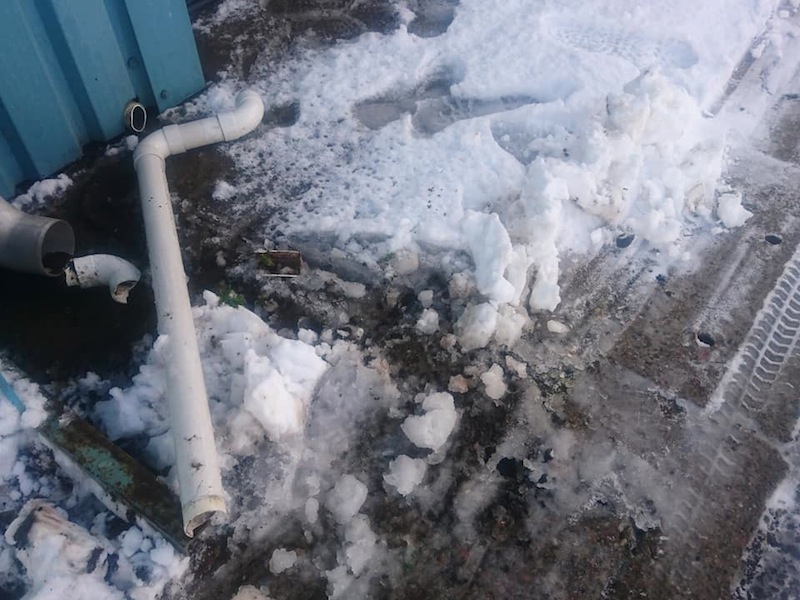 The prolonged snow from this beast from the east thing has even got inside the Scottish Aero Club hangar. There are a few holes in the roof which don’t get noticed normally as the prevailing wind is from the other direction, but now the snow is coming right in. Perhaps we should fix the roof? Luckily the Eindecker is nowhere near one of the entry points so the open cockpit is not full of snow! 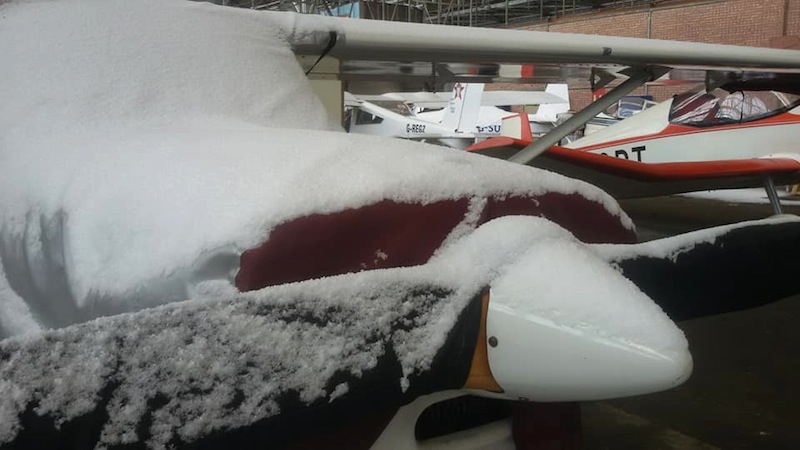 So it’s cold, it’s snowing, there hasn’t been much flying of any type and the aero club hangar leaks. But not to worry, spring is just around the corner… 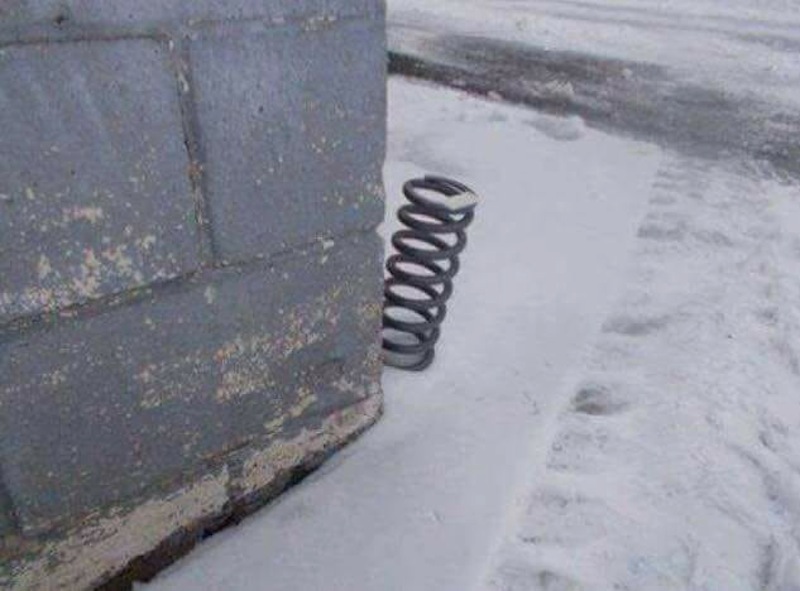