One snag with flying in to an air park can be lack of ground transport. Luckily we were given the use of a “spare” car by Toffe. He was airfield manager for years and is still the go-to guy when you need the heating turned on or the grass cut. The Siljansnäs Flygklubb also have a car for rent by visitors at reasonable rates…but it is in high demand and not always available. 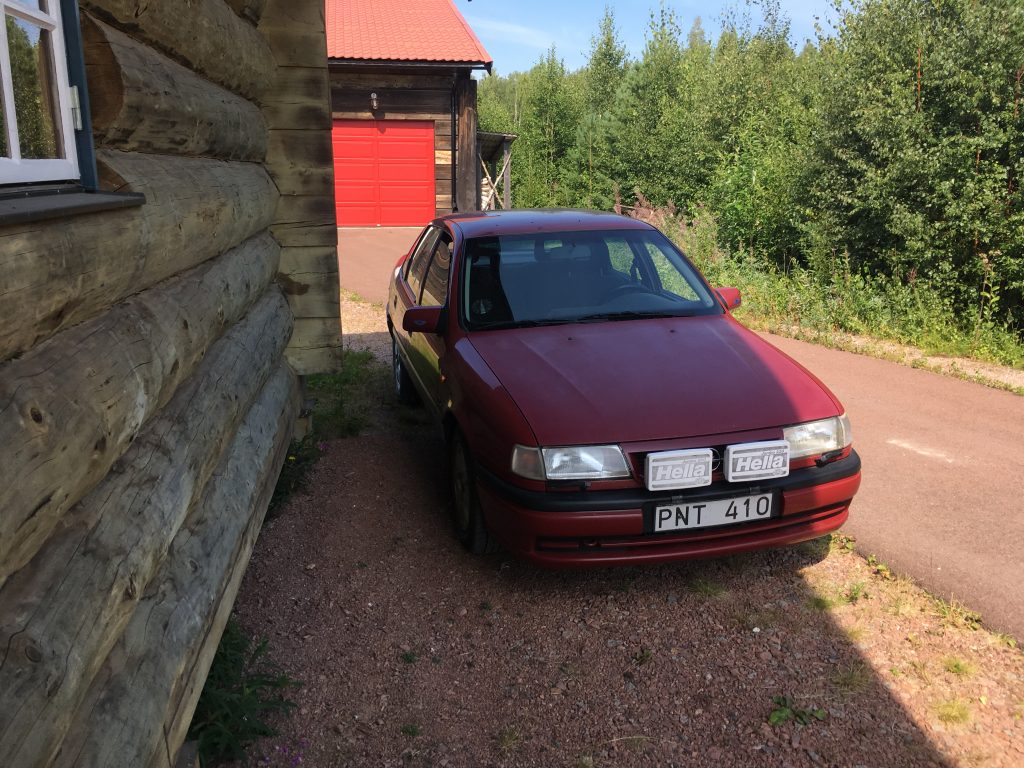 Looking at the long range weather patterns on wxcharts showed a potential window of three days for getting home the next week, so we relaxed and settled in for four days.

Having access to a hangar is awesome…we were able to make a mess and not have to tidy up! We pulled the cowlings and made sure everything was secure, hinges lubricated, tyre pressures OK and the oil topped up. In 15 hours of flying the engine had burnt only a tiny amount of oil. We added a smidge to get the level back in the middle of the range on the dipstick.

Using the excellent Onedrywash stuff we cleaned and polished the whole airframe…after having removed 1500 miles worth of crusted on insects. That was fun. 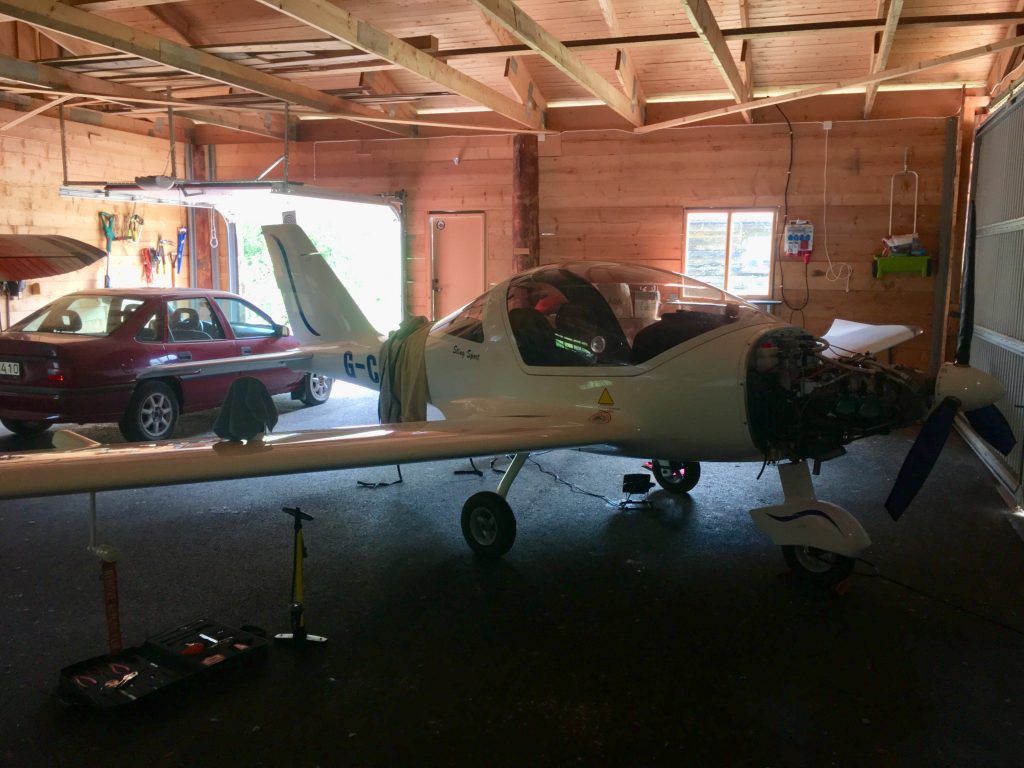 We planned to start the return trip on Monday – on Saturday the weather broke and it rained on and off for two days…the first rain for weeks. 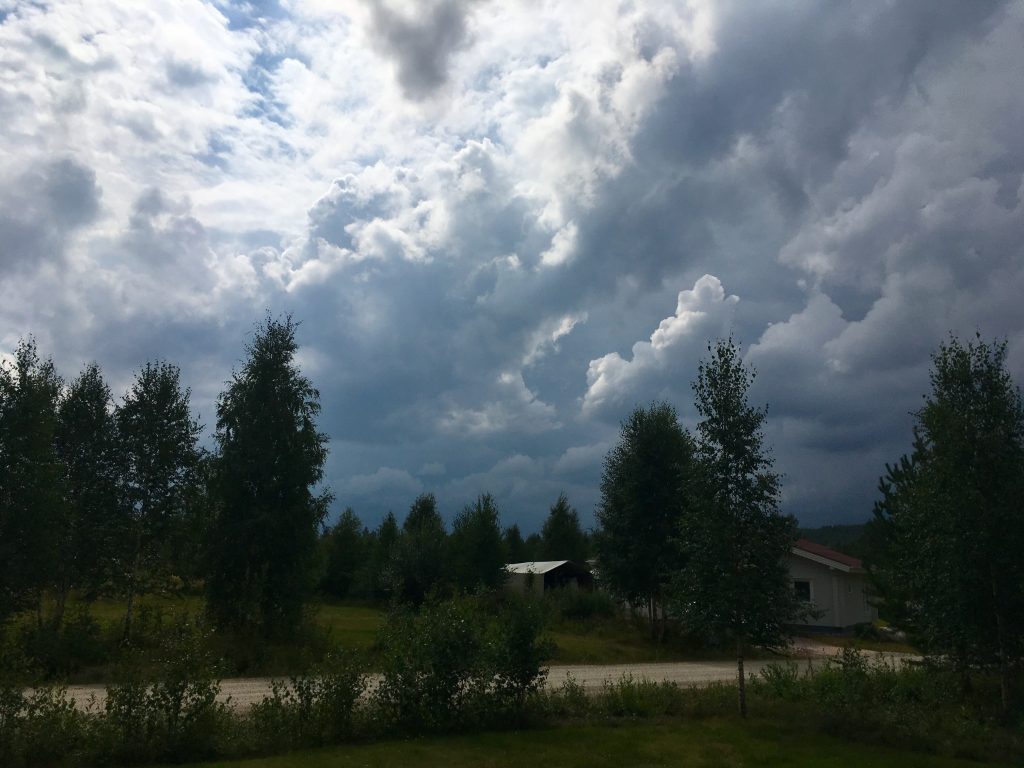 Some evening visitors to the garden. We were sitting on the deck and they sauntered right past us and only started running when they heard the shutter noise from the iPad camera: 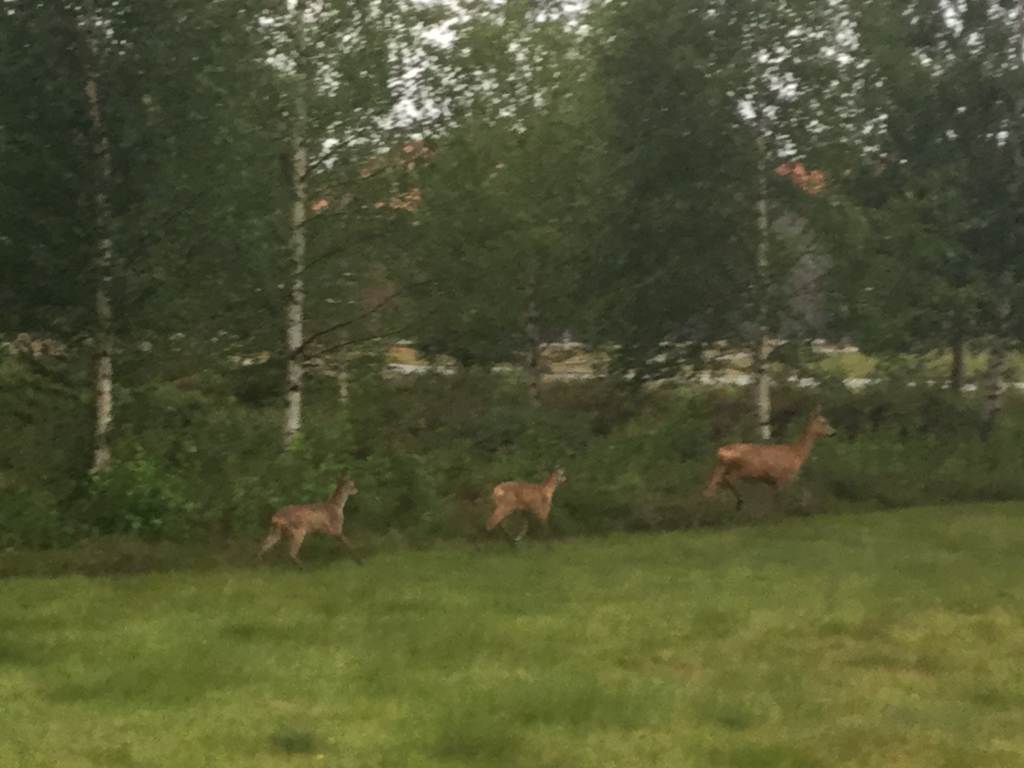 On Sunday I taxied to the pumps and refuelled in a gap between showers. The Monday forecast was now a grey start but clearing up later. We weren’t too concerned as we had five days for the three day trip…but I had a kind of sinking feeling standing in the rain taking this photo: 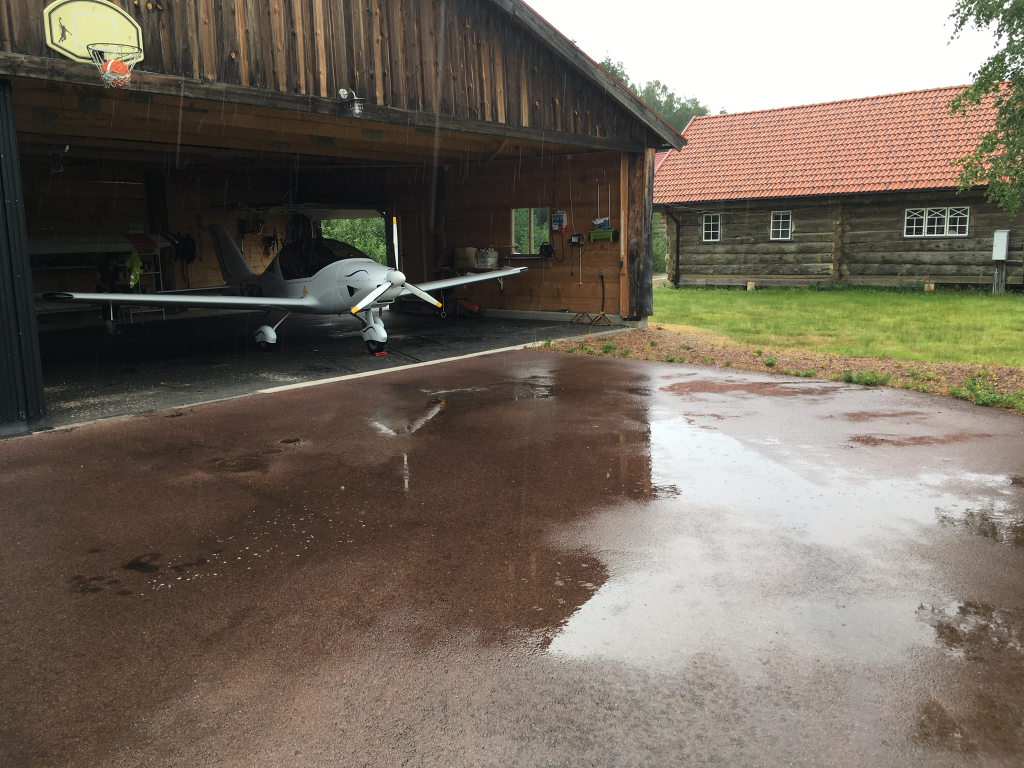 Monday morning. We were up early, aircraft out and ready to go. The weather didn’t cooperate. As forecast it was grey and misty first thing… 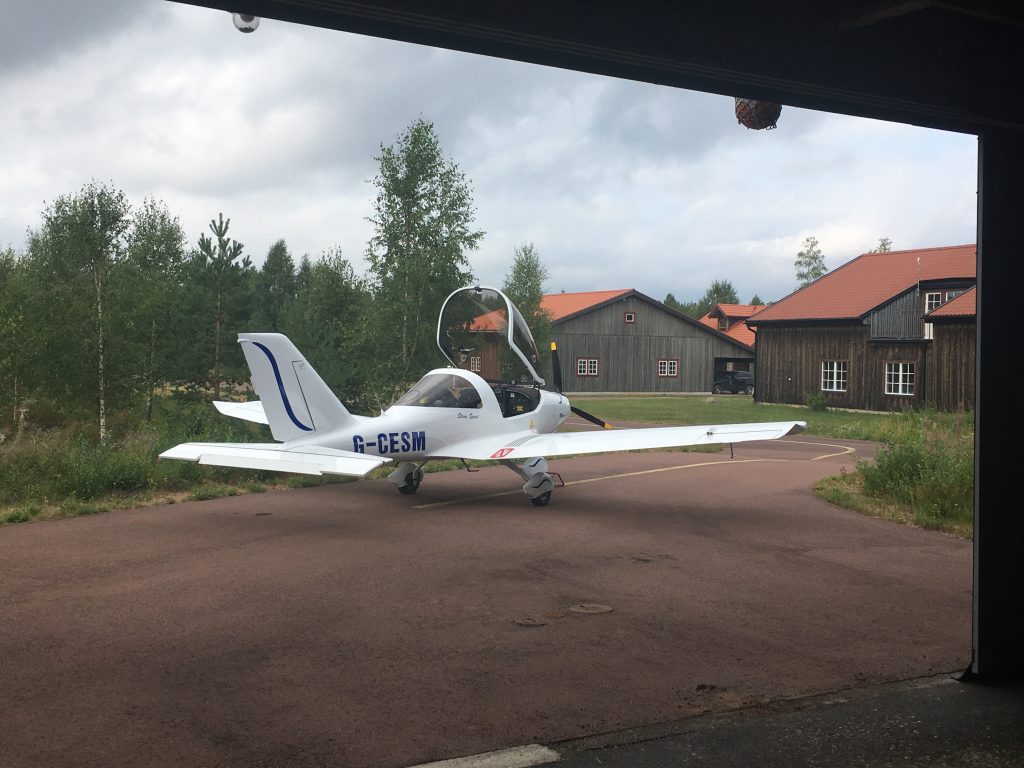 Apparently all the weekend rain had fallen on hard sun baked ground and rather than soaking away it sat around and evaporated into low cloud and mist overnight. Eventually it did brighten up and we were able to depart. 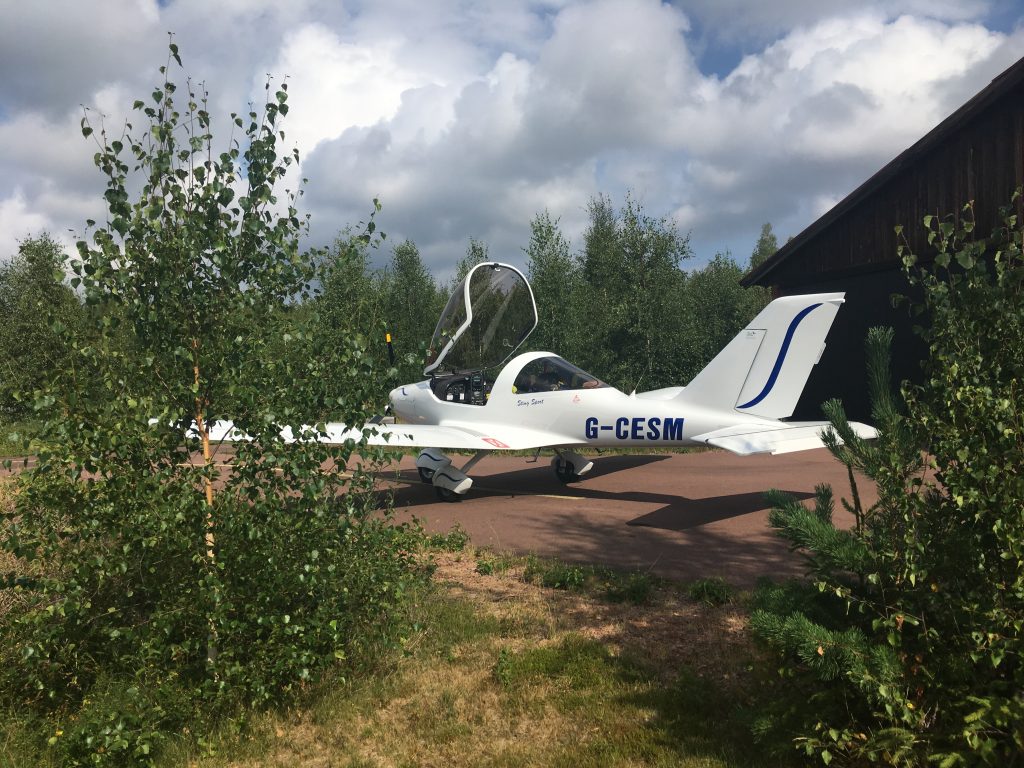 Climbing out over Siljansnas village after takeoff from runway 14: 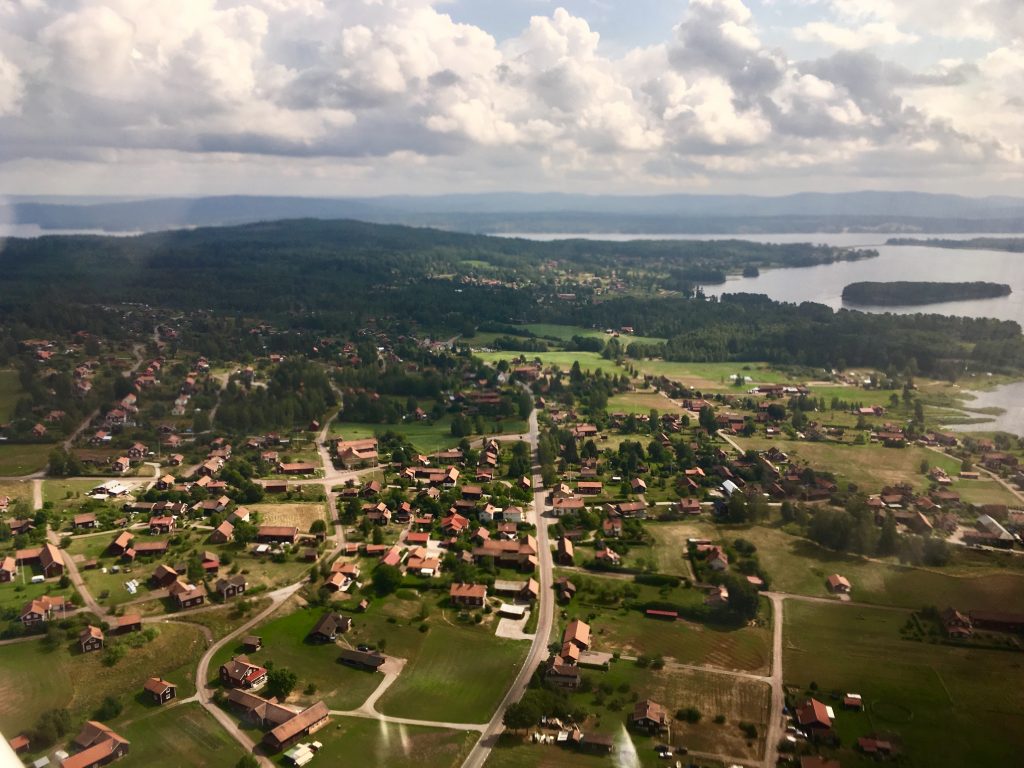 Once settled into the cruise and talking to Sweden Control with the flight plan activated it was time to look at the trees again. The clouds slowly cleared as we progressed further south… 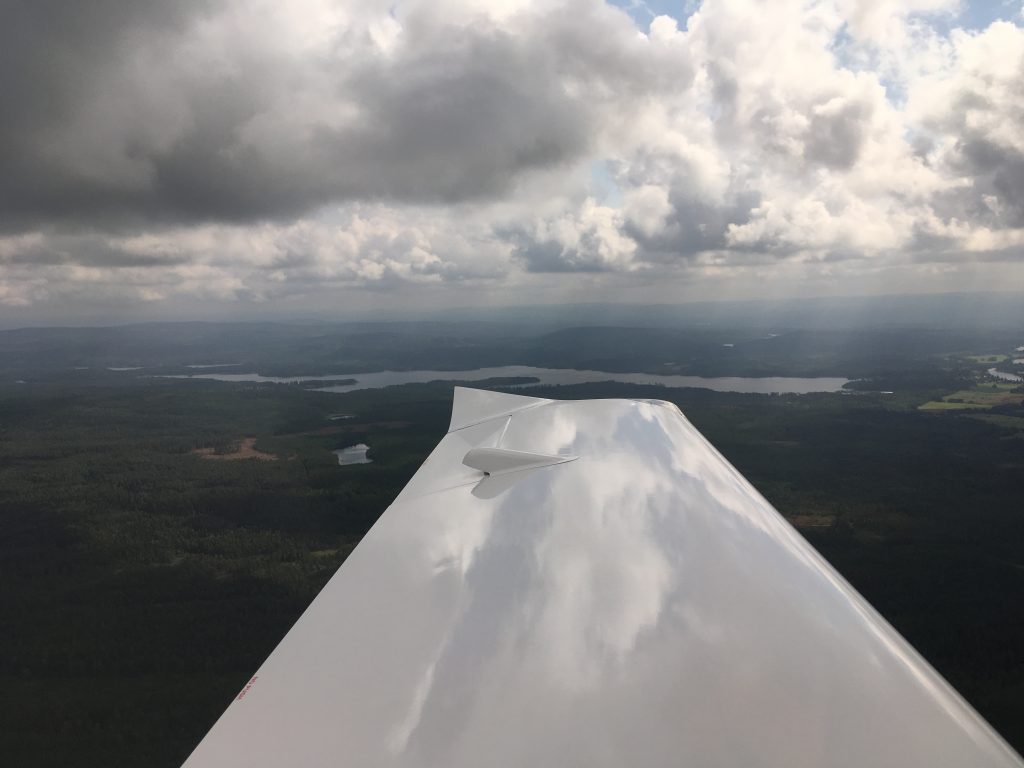 A point about the flight plan…our first two legs were within the country and not crossing any international boundaries, so a flight plan was not mandatory. Since it’s for search and rescue purposes and there’s a lot of countryside to get lost in it’s better safe that sorry, we did submit one for each leg. To save time on the turnarounds we filed all the flight plans in the morning and then just adjusted the timings with a delay message as the plan fell apart. 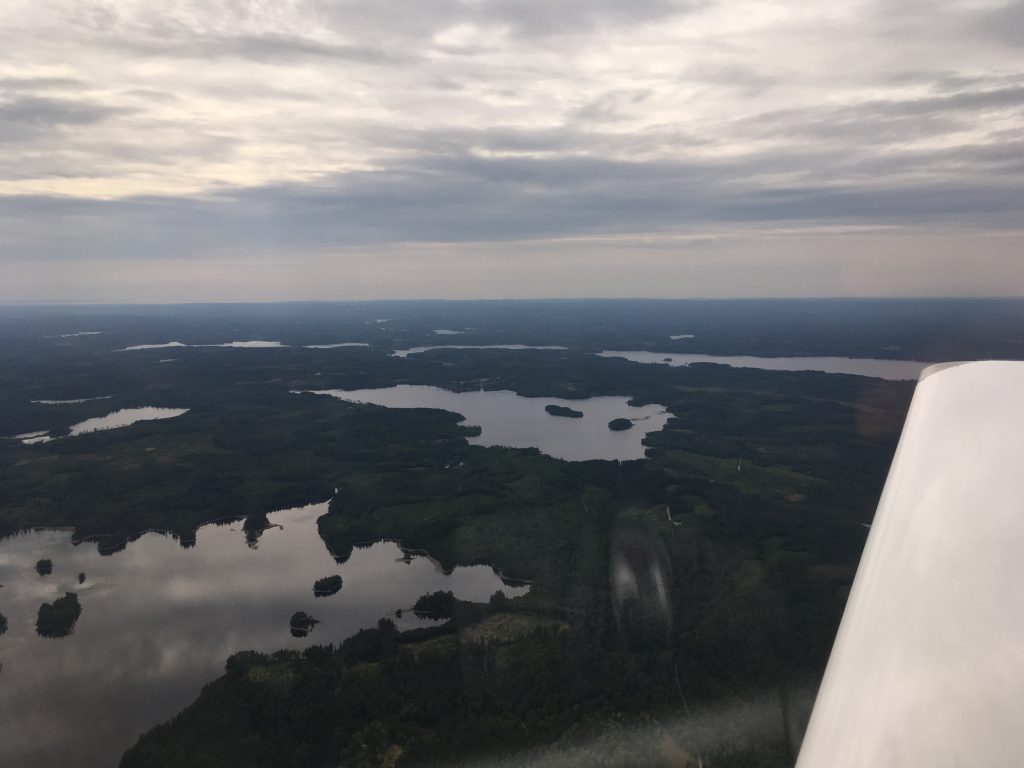 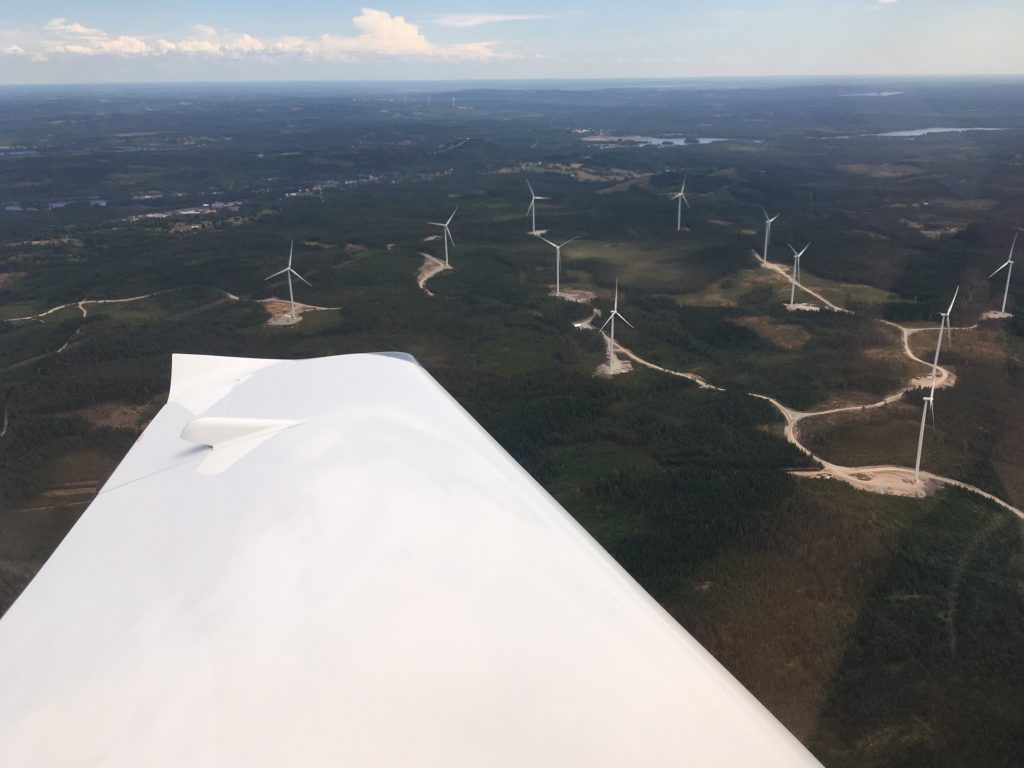 We had decided to split the long leg down through Sweden and aimed for the airfield at Falköping. By the time we got there and pulled up to the fuel hut the clouds had almost totally cleared and it was hot again… 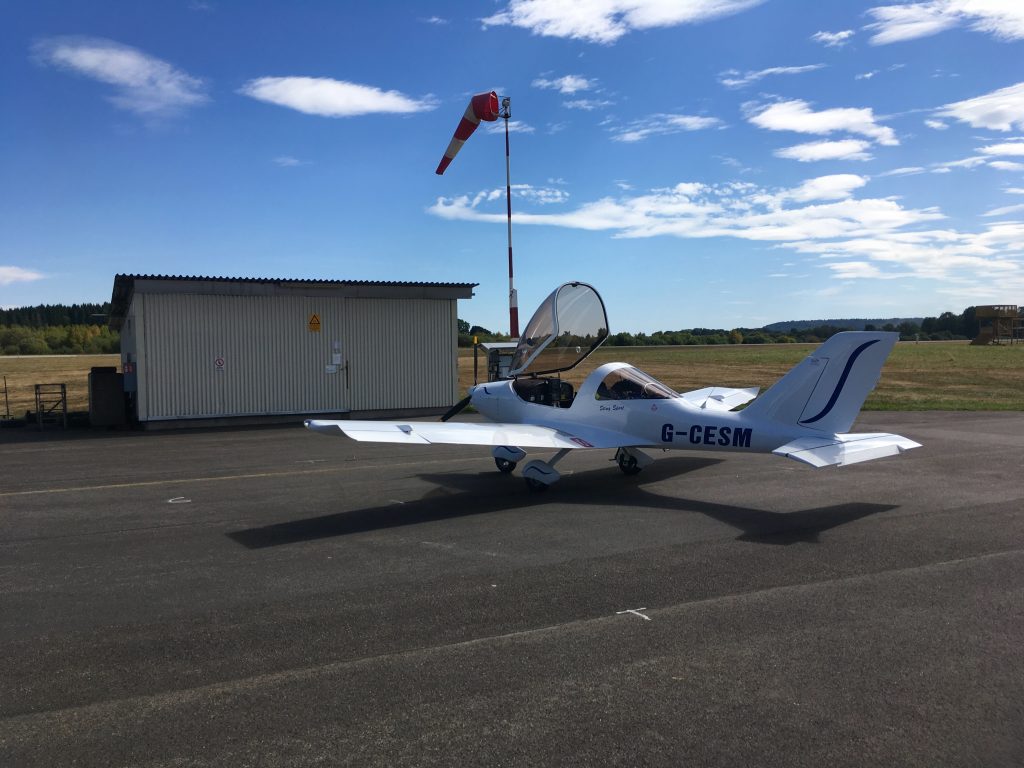 Falköping is just about exactly halfway between Siljansnäs and Höganäs, and almost on the straight line between the two airfields. We had passed overhead on the way north. Every year they hold an EAA fly in, this year’s event in early June had 140 aircraft attending.

It was quiet when we landed with only one other aircraft movement while we were there. The tower wasn’t in use at the time, just blind calls on the radio. 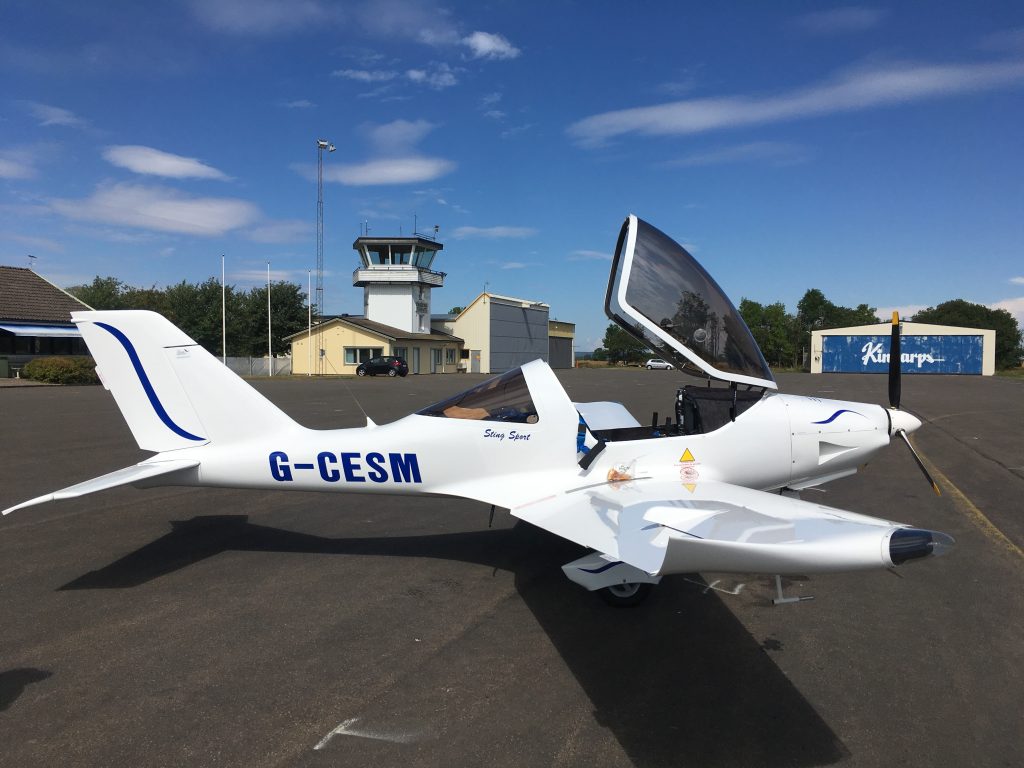 The helpful club guy refuelled and after paying (and the obligatory Swedish flying club ice cream), we were off to Höganäs. Flying south we passed a small area of what could be English countryside: 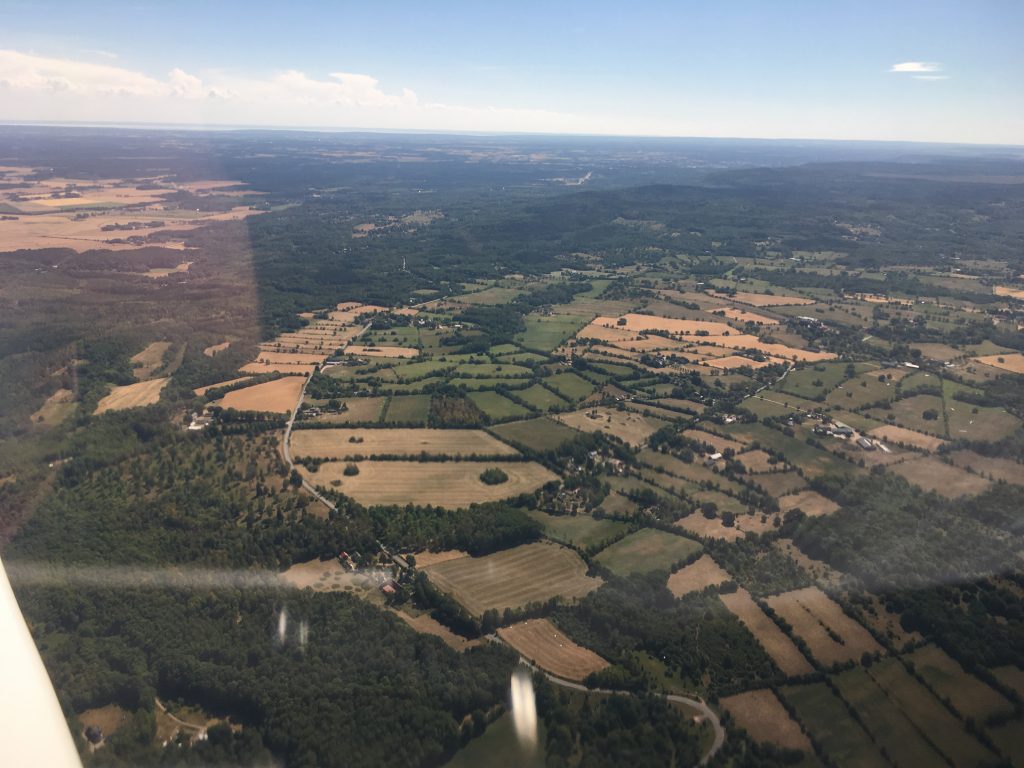 This time we had pre-warned Höganäs by email and they were ready for us. Refuel was quick and it was now very hot so we had a break to rehydrate. 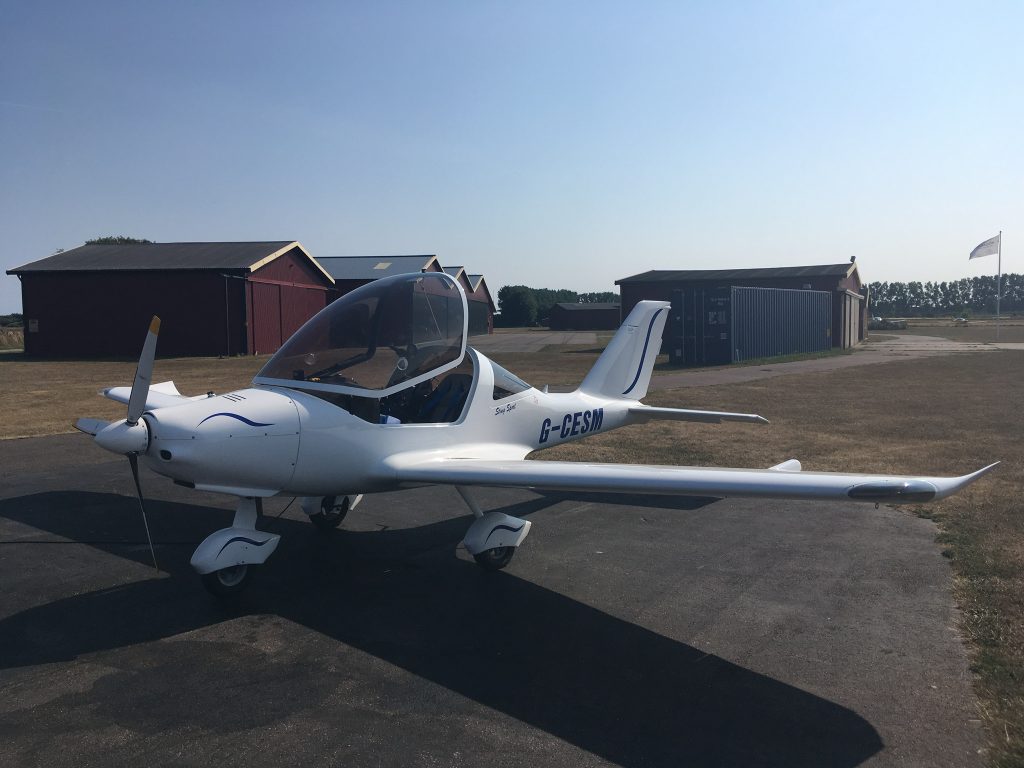 Then we were off again, on the final leg of the day – destination Lübeck in Germany. Very soon after taking off from Höganäs we were crossing from Sweden into Denmark: 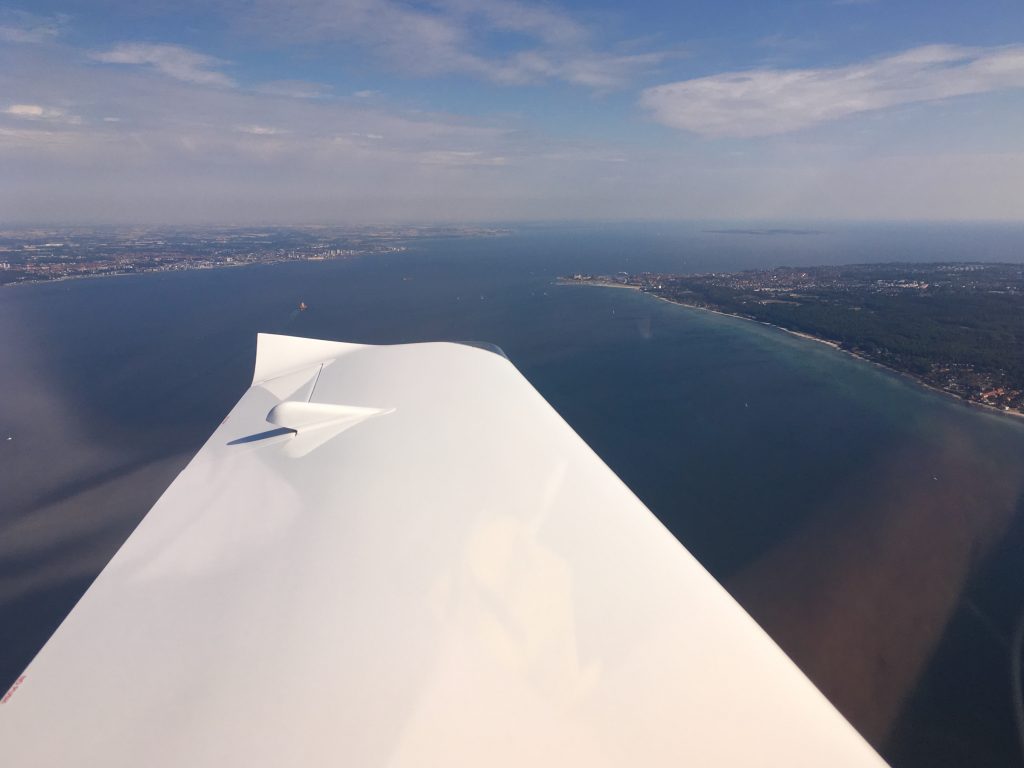 If Denmark had the same rain we had in Sweden, it didn’t really show. Still as dry and yellow as before: 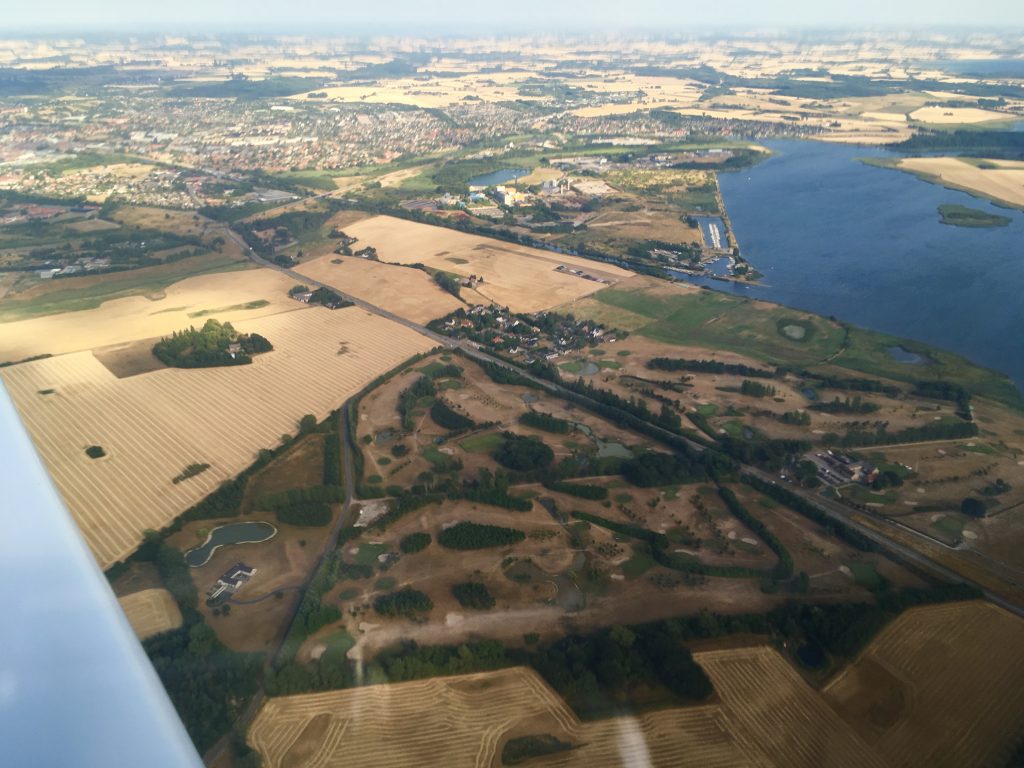 A slightly different routing though Denmark took us along the coast with great sea views out to the right: 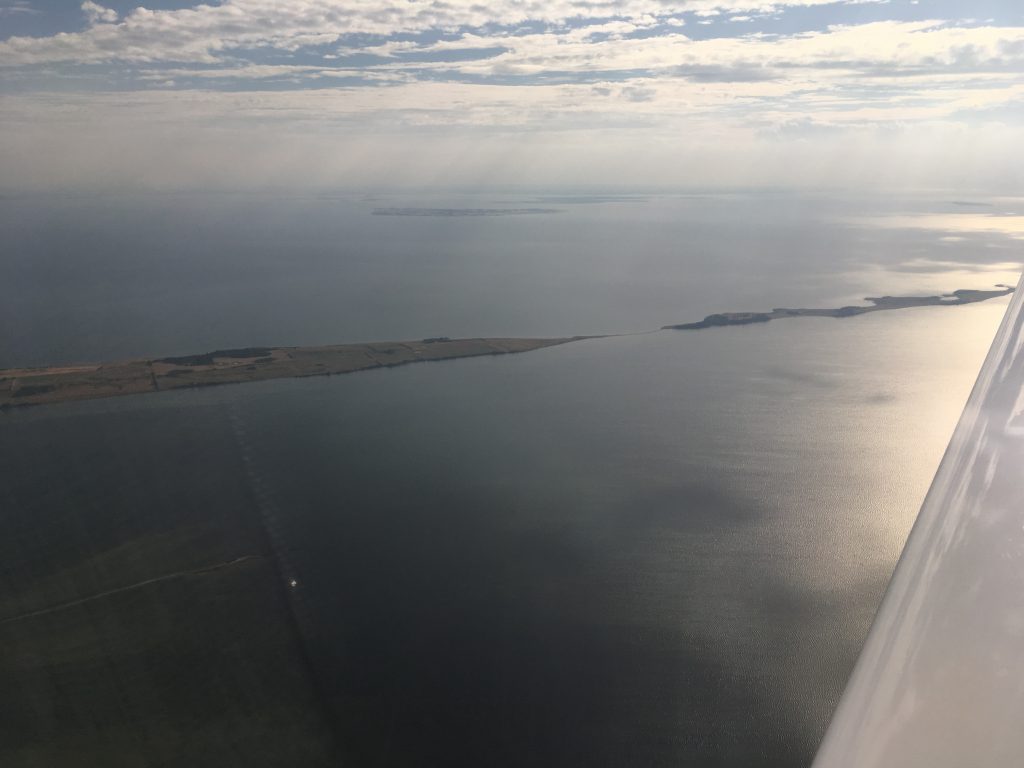 The island of Femø just off the wingtip. There is a 645m grass airstrip on the island, but apparently it is closed at the moment. We’ll have to come back: 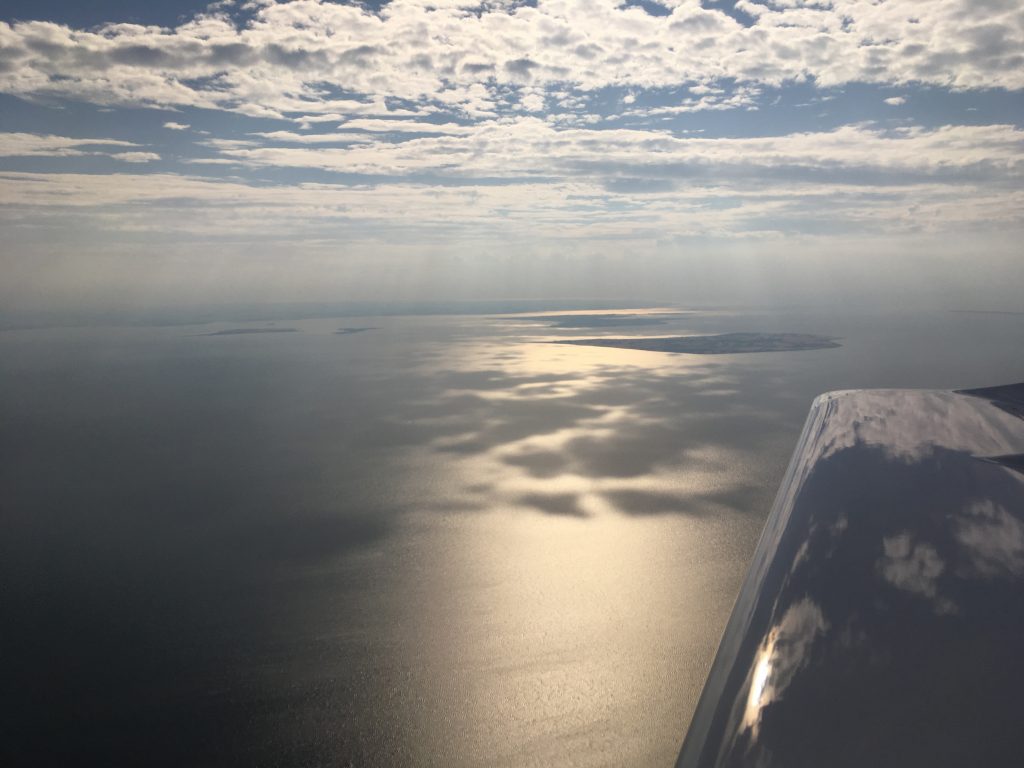 Pretty soon we were approaching the boundary, following the route of the Rødbyhavn to Puttgarden ferries which shuttle back and forth across the 10 mile stretch of water between Denmark and Germany. We signed off with Copenhagen Info and wondered whether Bremen would talk to us this time… 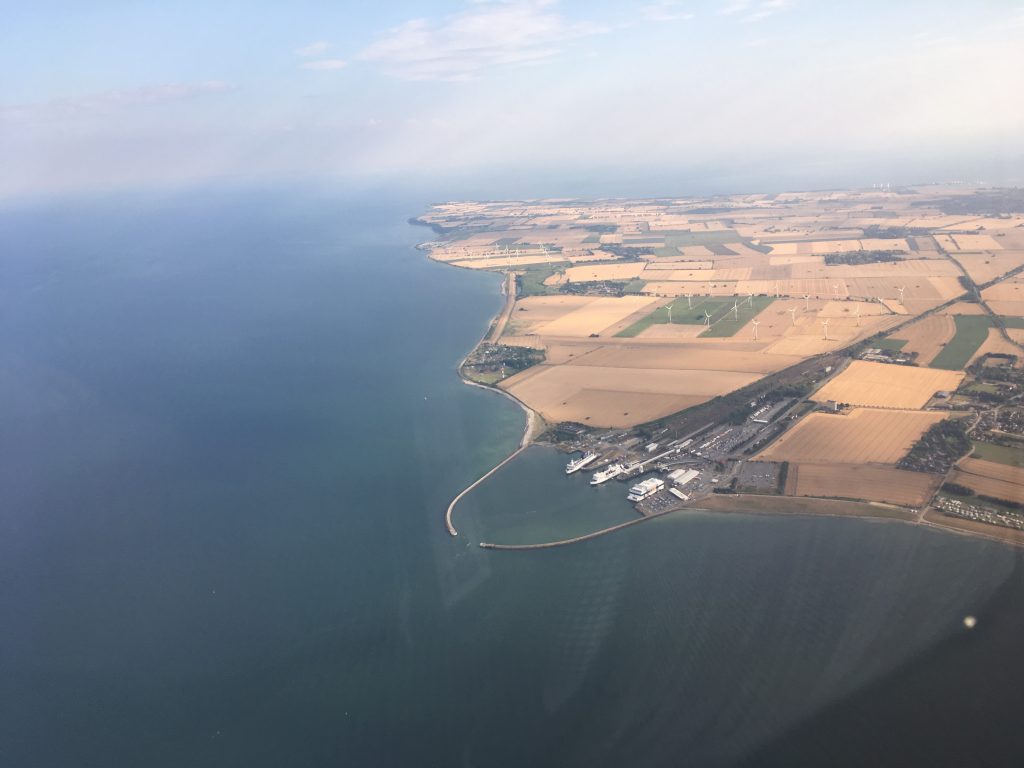 Bremen Information answered us immediately, loud and clear. By the time we had checked in and set the transponder code we were back over dry land and had 50 miles to go to Lübeck. 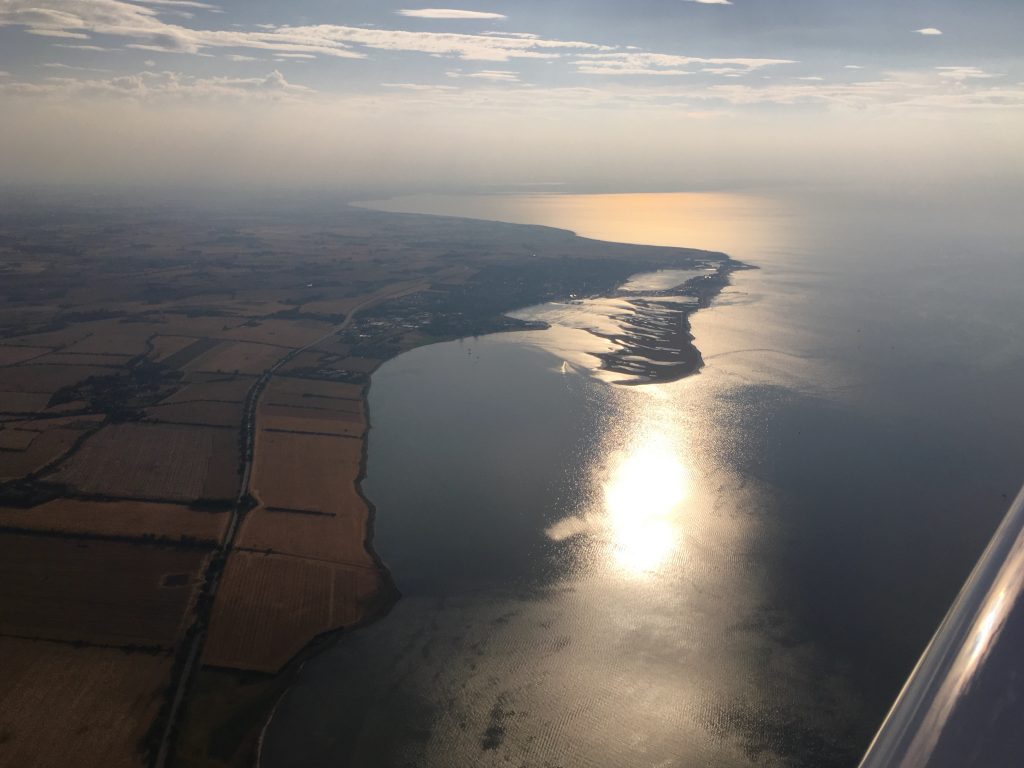 Lübeck-Blankensee airfield is to the south of the city. Approaching from the north we could make out the old town with its distinctive green spires in the distance: 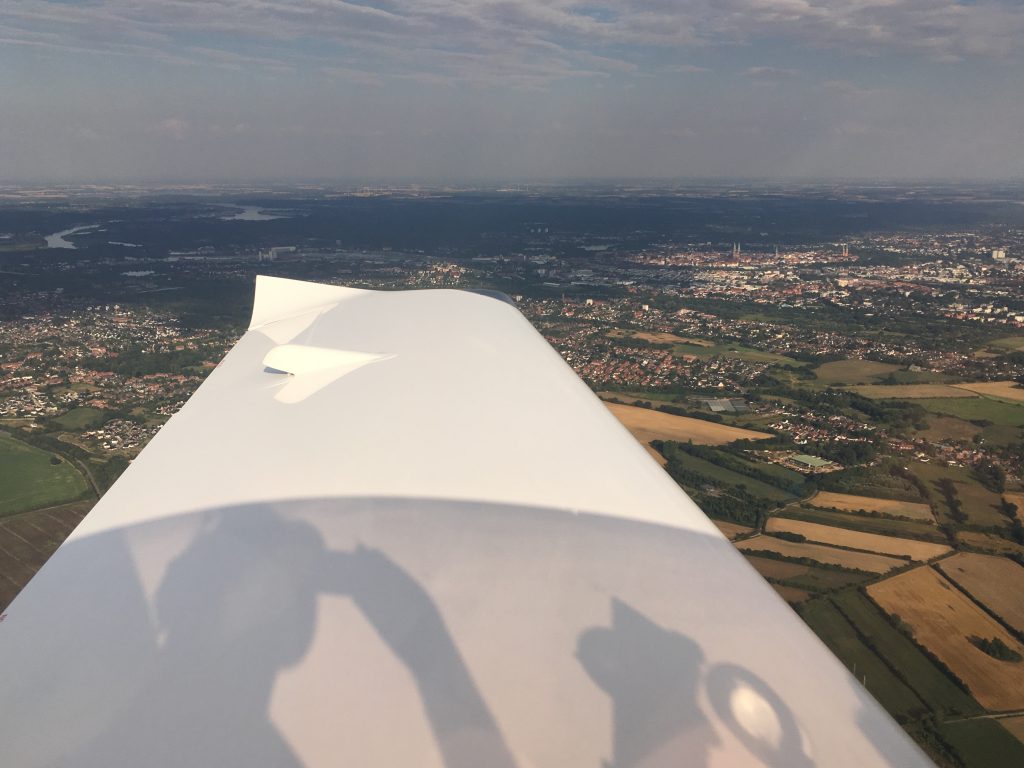 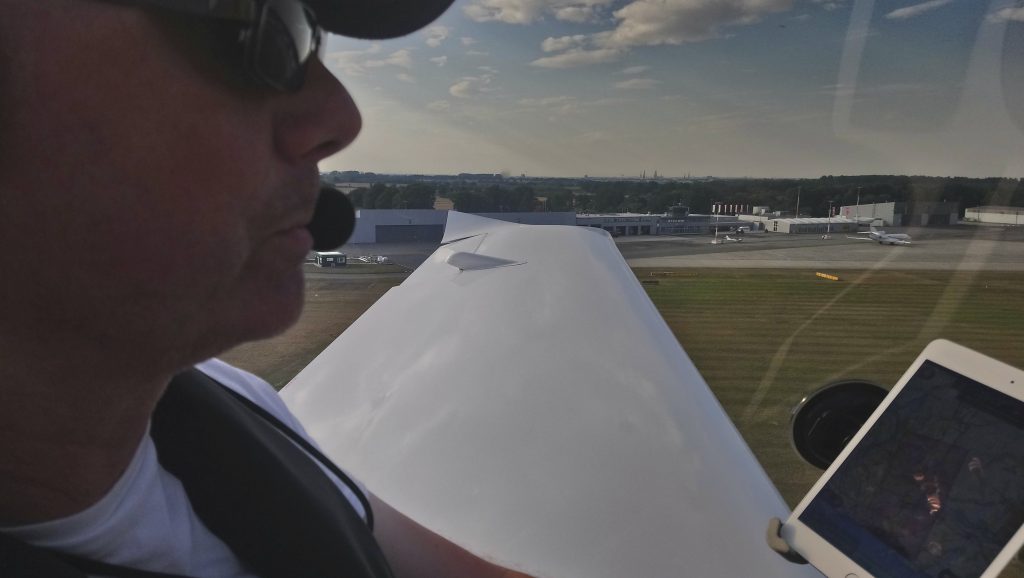 Flughafen Lübeck is 440 nautical miles from Siljan Air Park in a straight line. Our route was slightly more wiggly due to the detour around Copenhagen’s airspace after leaving Sweden, but not much. Not a bad days flying. 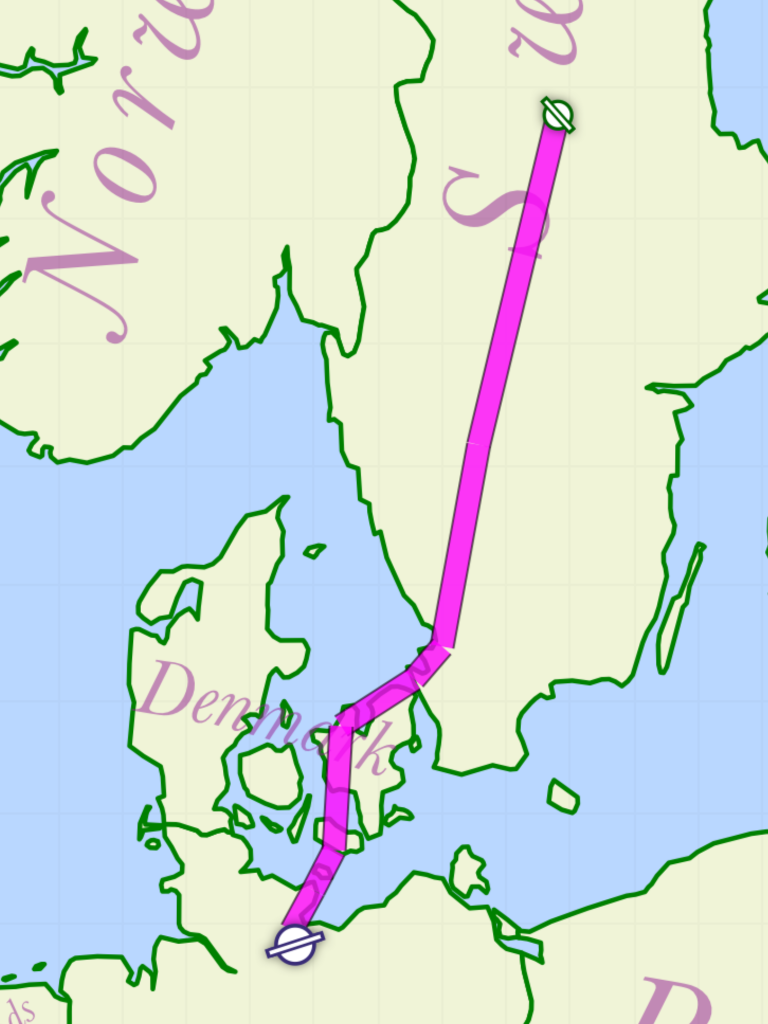 After putting the aircraft to bed we got a taxi into town. We had already booked the posh sounding Hotel Excelsior and pretty soon we were checked in and ready for a bite to eat. It was a short walk into the old town; by chance, the bridge we crossed led directly into an area teeming with cafés and restaurants, so we were spoilt for choice: 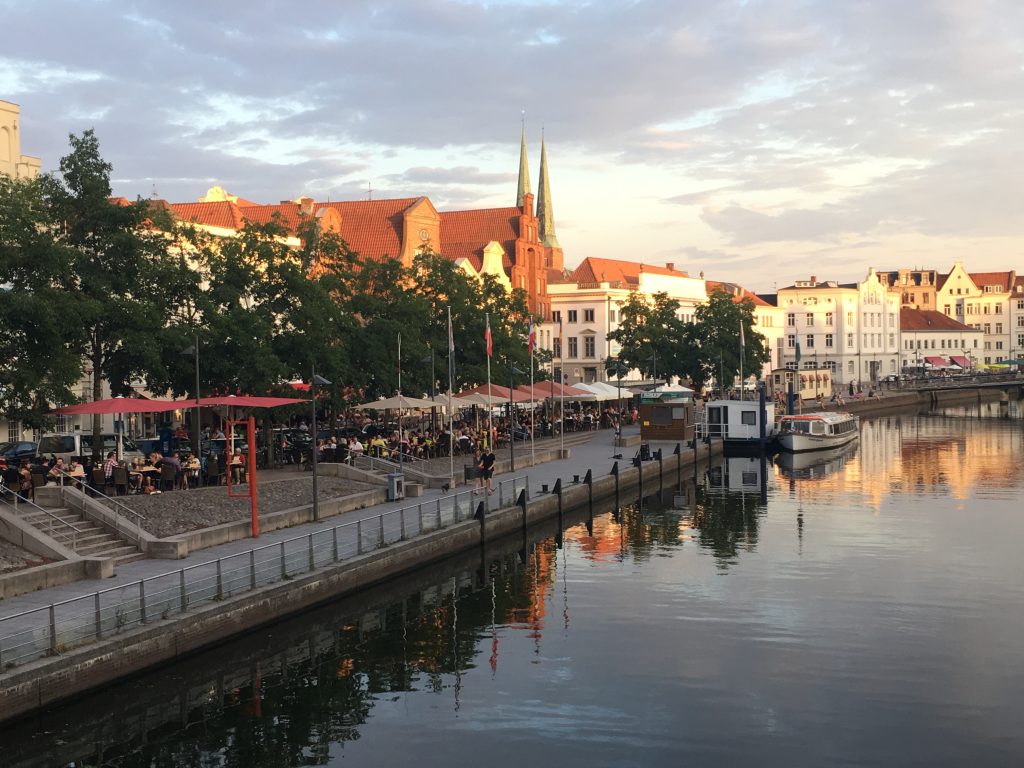 We finally settled on yet another pizza restaurant, and made a start on the rehydration. The table behind us was full of Swedish students on a trip, it was if we had flown for a day and not gone anywhere! 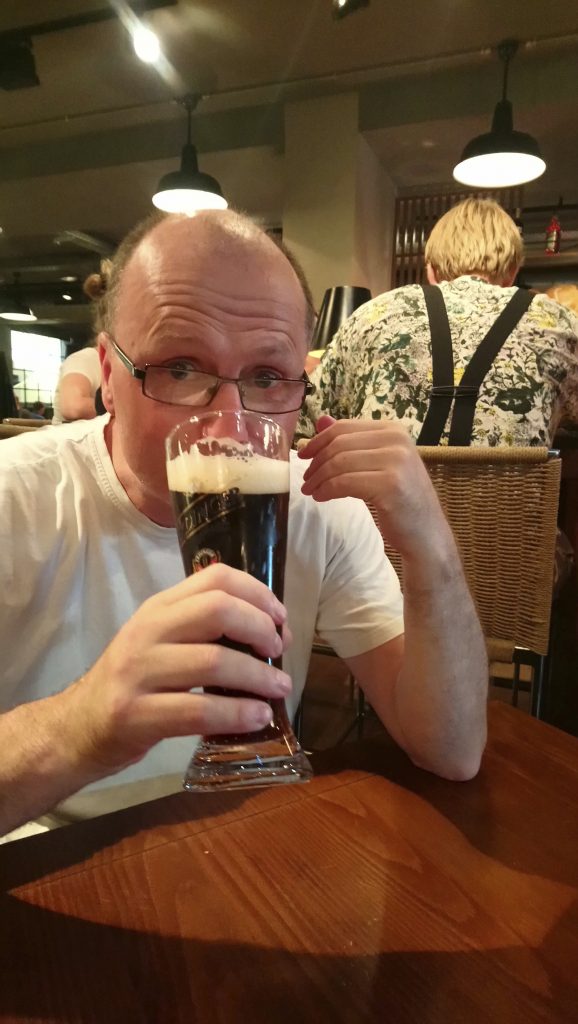 After an excellent pizza, we passed the Museum Holstentor on the way back to the hotel. According to the Google this is an “iconic gothic gate” … 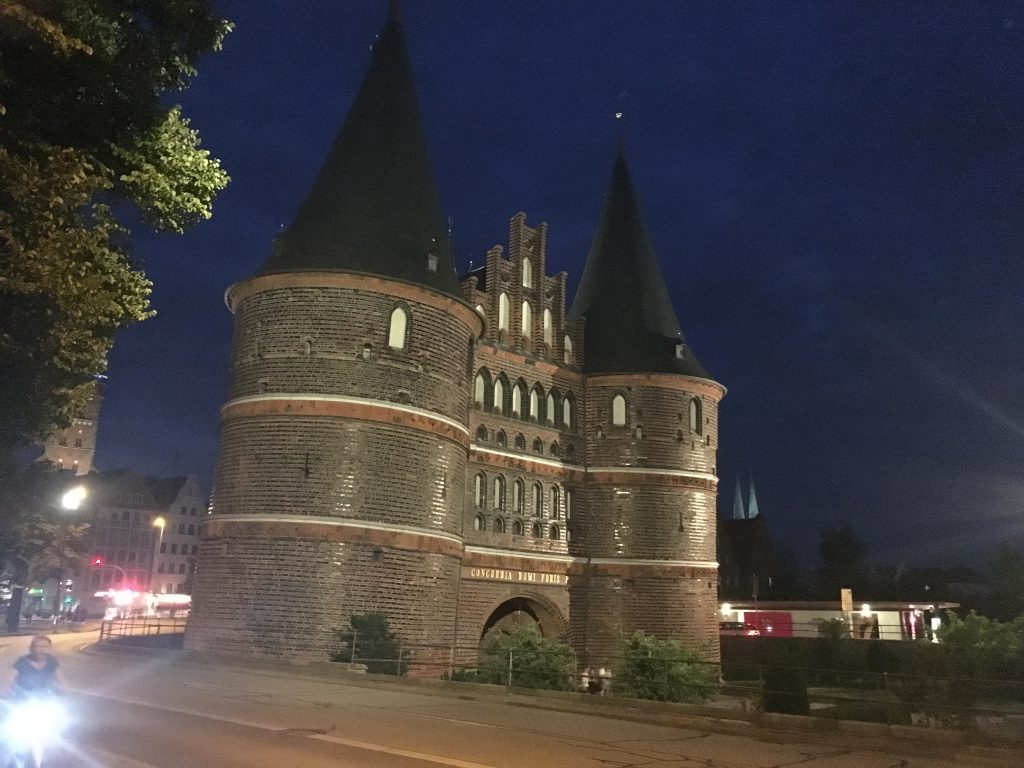 And so…back to the hotel for a big sleep and worrying about the next day’s routing and the forecast. Once again the plan was about to fall apart…